Following the success of the ‘Star Wars Galaxy’ trading cards series in 1993, Topps were looking for another new direction in which to take George Lucas’ franchise. In hindsight, the decision seems obvious given the proliferation of retail widescreen VHS. Topps decided that they were going to take a ‘Panavision look’ at the ‘Star Wars’ universe and those cards are documented in the latest volume from Abrams Comicarts’ ‘Star Wars: Widevision – The Original Topps Trading Cards Volume One’.

Once again, the genial Gary Gerani is our guide who, by the mid-90s, was living out in Sherman Oaks, California, heading up Topps West. By this point, Topps were still producing traditional trading cards, but also had perceived interest in what they called the ‘direct market’, ie those who didn’t need gum, but liked collecting the cards. ‘Star Wars Galaxy’ had cemented the business case for such an approach. It was line of art cards, appealing directly to the Star Wars fan rather than a mass audience. It was during a dinner conversation that Gerani and company talked about odd-shaped cards and it got him to thinking about the anamorphic lens that was attached to his 16mm projector, that would allow movies to be displayed in Cinemascope or Panavision. It didn’t take Gerani long to imagine a set of widescreen cards and there was no better movie to start with than ‘Star Wars’. In a matter of weeks, an agreement was reached with Lucasfilm and Topps were set to make ‘Star Wars’ cards once more.

The major change this time around was the genius decision to style these cards as being for the movie literate. Knowing how much fans lapped-up making-of content, Gerani conceived each card’s visual as being subtitled with a location line lifted straight from the screenplay such as ‘Int – Death Star – Conference Room‘ or ‘Ext – Tattooine – Rock canyon – Sandcrawler‘. On the backs of the cards, tiny nuggets of production information were placed alongside behind-the-scenes photographs and concept art. The images themselves were lifted from 35mm prints of the movie that Lucasfilm had stored. A fan could therefore get a much clearer image from the film than from the 70s and 80s cards on one side and, on the back, could compare the visual to production art work and the crew’s intention.

Favourite cards include Hammerhead from the Cantina scene, enjoying his drink in the moody light while, on the flip-side, monster maker Doug Beswick is shown standing proudly by a line-up of Cantina Band heads and hands. Another shot of the Death Star control room with Peter Cushing standing in front of the computer screen reminds you of how spot-on ‘Rogue One’ got their recreation of both the man and the set. A pleasing addition is the inclusion of cards from the 1997 Special Edition set.

Needless to say, this is another quality package from Abrams Comicart. Every back and front of the card is presented, aligned on opposite pages within the book so that you don’t have to flip the page to read the back of the card. To reflect the letterbox nature of the cards, the book has been presented in a wide-format which lends itself to being more of a cinephiles’ book than perhaps its predecessors. As before, with the Topps collection, the book comes complete with a set of trading cards neatly packaged in the back of the volume. Rounding-off the book is an afterword from ‘Star Wars’ collector Stephen J Sansweet.

At first, I wondered if I was going to be able to summon much enthusiasm for more reprints of images I’d seen hundreds of times over but the selection of the frames, coupled with the making-of information, creates a compelling package. ‘Star Wars’ has always been a widescreen, epic assault on the sense and the ‘Widevision’ cards go some way to helping preserve that reputation. 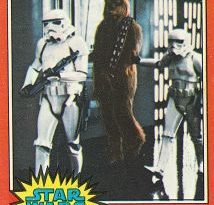 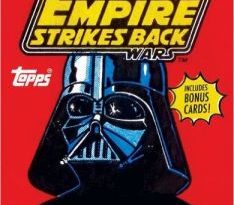