Of course, I’ve heard of ‘Slaughterhouse-Five’, but this has been the first opportunity I’ve had to watch it. More so, as I can’t recall it being on TV before. A bit of a delay in getting a blu-ray player that can go multi-region (as easy as 1, 2 3 with LG) and finally being able to watch it.

Billy Pilgrim (actor Michael Sacks) is unstuck in time, forever moving in time and place and place. This includes, in a later part of his life on some planet called Tralfamadore in an environment protected from the cyanide atmosphere outside and then into World War Two where he is captured and put in a POW camp. Over the length, we also get pieces of his background, including being locked up in a mental institution and being given shock treatment. Much of the film concentrates on the POW camp and what he learns there although the time switches can happen carefully.

Having never read Kurt Vonnegut’s original novel yet, I’m still not sure if he is co-existing with his other selves in different time periods or just remembering his life. I mean, it’s not as though anyone sees him disappear. They are moved to Dresiden and the latest camp is called Slaughterhouse-Five. Pilgrim’s future self is a successful businessman and although he predicts his charter aircraft crashing is unable to stop it and barely survives. We don’t actually see the Tralfamadians, just their disembodied voices and they pick the older Pilgrim and Montana Wildhack (actress Valerie Perrine) to their home planet to watch them behave or have sex and have a baby, let alone return to Earth for his own death. 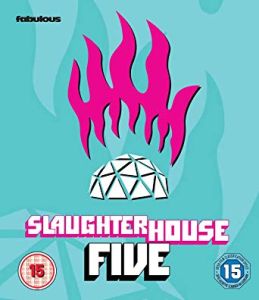 This is an odd film and the only SF element is the time travel aspect but the phases of it aren’t really seen. He’s just there so there’s no telling as to whether Pilgrim is reliving aspects of his own life or actually time travelling.The audio commentary is conducted by author/critic Troy Howarth specialising in European cult films. Interestingly, Howarth looks like he’s seeing this like I do that Pilgrim drawing up his memories from across his life than time travelling across his own timeline. Pilgrim is also a passive character so don’t expect heroics. Howarth’s monologue is fully researched, telling of all the characters and actors giving their careers and aspects of the film. There’s a reminder at the end that ‘Slaughterhouse-Five’ was not a success at the time but has achieved cult status.

There are several all new extras. We start off with ‘And So It Goes’, running at 21 minutes, where film critic Kim Newman looks over the film. I’m not sure if I agree with his assessment of George Roy Hill as not being consistent. Just like actors, directors don’t like to be pigeon-holed in one category and will take any opportunity when offered. I do suspect after his assessment that you’ll be running after the other films based off of Vonnegut’s books if you enjoyed this film.

‘Pilgrim’s Progress: Playing Slaughterhouse-Five’ is a 14 minute interview with actor Perry King who played Robert Pilgrim and how he was directed shows an important lesson in dialogue is not always important once the message of the scene is given.

‘Only On Earth: Presenting Slaughterhouse-Five’ is a 9 minute interview with Rocky Lang about his producer father, Jennings Lang, about his life and films. Rocky, himself, was 14 years old when it was filmed so had some first-hand experience of things behind the scenes.

‘Unstuck In Time: Documenting Slaughterhouse-Five’ running at 14½ minutes is an interview with Robert Crawford Jr. who was filming the filming. Oddly, his documentary was never released or completed and I wish that question was answered to explain why.

‘Eternally Collected: Composing Slaughterhouse-Five’ is a nearly 12 minute an interview with film composer Daniel Schweiger examining the music used in the film played by pianist Glenn Gould mostly by Bach and some comparisons to Kubrick’s ‘2001’.

Finally the 4½ minute film trailer. At the end of which, it is pointed out that ‘Slaughterhouse-Five’ is the only American film to have won the Special Jury Prize at the 1972 Cannes Film Festival.

Although I’m not sure if ‘Slaughterhouse-Five’ is Science Fiction, mostly because any aspect of that is downplayed so much. Even the Tralfamadian aspect doesn’t really have much SF about it. As a film showing the treatment of POWs in WW2 does have a stronger realism to it that, even now, should still shake you up and some superb performances from actors Eugene Roche and Ron Leibman. I can see how it has developed its cult status and should be on your watch list to see at least once.