Japan assesses its relation to the rest of the world and its relation to itself and its culture in a reboot of the classic Japanese series. This is the most serious ‘Godzilla’ film since the first and’ except for the novelty the first film had, this would probably be the best ‘Godzilla’ film ever made. It also has the best special effects. Hideaki Anno writes and co-directs with Shinji Higuchi.

It starts with what sounds like a drum booming three times. Then comes a roar that sounds like steel girders collapsing under huge pressure. In 1954, this was the opening of the film ‘Gojira’, the film that introduced to the world the creature called Gojira or Godzilla and that is just the sound that starts ‘Shin Godzilla’, the reboot of the ‘Godzilla’ series.

That 1954 film was much more than just a special effects outing not being about much, it was about something. It asked the question more relevant today than it was in 1954 of whether scientists are responsible for the uses to which their discoveries are applied. It was the subsequent ‘Godzilla’ films that got to be silly fun. Until now, none but the first ‘Godzilla’ film had serious purpose. In ‘Shin Godzilla’, once people realise that something grim is happening, the film turns into a seemingly endless string of discussions, debates, and power struggles among government agencies. Some of the politicians definitely are more responsible than others, though American audience may have trouble keeping straight the very large set of characters and agencies. Soon, the Americans are bulling their way into the war against the prehistoric titan Godzilla. For some, the American aid is a welcome presence and, for others, it is a theft of power.

When it appears that the Japanese islands may have to be evacuated, the issue becomes how the Japanese love their home and culture, similar to the theme of ‘The Submersion Of Japan’ (1973). ‘Shin Godzilla’ even works in a small tribute to Japanese origami. This is all very serious in intent, though the various agencies in- fighting is at times humorous. The film also serves as a tour of Japanese government agencies and of Tokyo districts.

At the beginning of the story, there are strange things happening in Tokyo Bay. There are people disappearing and the underwater tunnel is flooded. A strange geyser comes spraying out of the water. Soon, there is a gargantuan amphibian creature crawling ashore, knocking over buildings and at the same time metamorphosing into the Godzilla shape we are used to seeing. While all this is happening, the civil government is having an endless string of meetings trying to decide how to handle these catastrophes. This combines with special effects of urban destruction. The images are more realistic than in most ‘Godzilla’ films but with still much less immediacy than we might have expected after seeing genuine building destruction on 9/11.

Much of the danger from Godzilla comes from his being much bigger in ‘Shin Godzilla’ than he has been portrayed before. He is powered, it seems, by a nuclear reactor in his body. Visually, this is one of the most awesome-looking renditions of the creature. The special effects people at Toho often tamper with his looks depending on the intended audience. He is much rounder and more pleasant looking in the episodes aimed at a younger audience. In this film, he looks as tall as a mountain.

Fans of the series will be pleased that the films re-use sound effects taken directly from the first film. Also, the film makes generous use of Akira Ifukube’s music from the early films. What is missing is the man in the monster suit. Some of the effects are obviously digital. This is Toho’s foray into having Godzilla be an animated digital figure rather than a man in a suit.

Some of the film will be difficult to follow for American fans. There are two sets of sub-titles on top of each other, the location, eg ‘Prime Minister’s Headquarters’ or character’s name and title in Japanese, and then the dialogue in English on top of them. The English for the location or character is shown at the top of the screen. Even speed readers will have trouble keeping up. American viewers would have been a better served with a film at 2/3 the length and with half the number of characters. This might be a better film to see on video. I rate the ‘Shin Godzilla’ a high +2 on the -4 to +4 scale or 8/10. 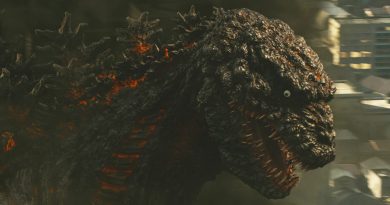