Claymation specialists Aardman Studios tries a silent, feature-length animated film with Shaun leading his fellow sheep to the big city, looking for their missing master. This is essentially a silent film in the grand tradition of the 1920 screen comedies. As a silent, the film is almost entirely limited to sight gags and they come thick and fast and most of the gags work. Mark Burton and Richard Starzak co-directed and co-wrote.

Aardman Studios was founded in 1972 to work primarily with clay animation. These days, like most other animation studios, they are taking forays into computer animation. Aren’t almost all animators? My understanding is that ‘Shaun The Sheep’ is still done in clay as it gives the animator a great deal of freedom of facial expression and hence personality, at least at some level. In fact, one drawback of their current ‘Shaun The Sheep’ is that one remembers the animated sheep’s facial expressions, but does not really understand Shaun as a character. This lamb lacks acting chops. If you want acting chops in animation you go to Pixar.

Side note: Aardman until recently did have a sort of trademark style, but is getting away from it. Until recently, their characters would have wide mouths that made them look like they had a popsicle stick lodged in their mouth cheek to cheek. See Wallace of ‘Wallace And Gromit’. Aardman now seems to be getting away from this style. Shaun’s mouth is more normal-looking.

Shaun is already a TV star with a following in Britain. Now he comes to screens internationally. Shaun’s great adventure starts with boredom. When you are a sheep, the days are pretty much the same. Tuesday is just like Saturday. Shaun plans to put the farmer to sleep and then the sheep can party for one whole day. The day arrives and the sleeping farmer is put in a car trailer. That is the high point of Shaun’s day, but once the trailer starts rolling on its own it is all downhill for Shaun. From there, the farmer is injected into the Big City and, thanks to a bump on the noggin, the farmer has forgotten who he is. Shaun wants to bring back that nice man who feeds the sheep, so has to go to the Big City.

The sheep do not speak in this animated film, so effectively this is for the most part a silent film, albeit a silent film with sound effects like some of the later films of the pre-sound era. This actually speeds up the pace of the film as a visual gag requires only an instant of time. Jokes can fly at the viewer in rapid-fire succession. There are probably more gags in ten minutes of ‘Shaun The Sheep’ than in ten minutes of classic comedies like ‘Airplane!’ What makes them even better is that the writer can make a throwaway joke obscure and not risk so much. I try not to give away jokes in my reviews, but to clarify my point there is an animal pound and one of the cats behind bars is wearing a flea cone and gives a Hannibal Lector snake hiss. Another dog has tattooed on the knuckles of one hand ‘bark’ and of the other hand ‘bite’. If you know the film reference, good. If you don’t, you will get the joke when you see the film Aardman was borrowing from. As following the conventions of the great silent comedians, our characters make excellent use of props.

This film is a cavalcade of jokes, with a high hit rate. I rate ‘Shaun The Sheep’ a +2 on the -4 to +4 scale or 7/10. Now my question would be that in the closing credits they list sheep and the people who played the part. Beyond a few mumbles what does it mean to play the role of a mute claymation sheep? 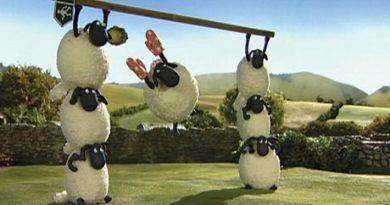