‘Seventh Decimate’ is the first book in an epic fantasy trilogy by Stephen Donaldson of ‘Thomas Covenant’ fame. Book three is just out, so I’m playing catch-up. Cards on the table, I confess to giving up on his much-lauded major work early in the first volume when some stone chap was sailing down a river and drove me nuts going on interminably. But I like Donaldson’s short stories in ‘Daughter Of Regals And Other Tales’ and ‘Mordant’s Need’ is probably my favourite epic fantasy ever, so I thought this was worth a go. 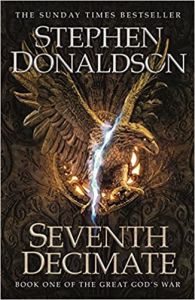 Our hero is Prince Bifalt, son of King Abbator, who rules Belleger, a land surrounded to east, west and south by impassable geography and with its bitter enemy, Amika, to the north. War with Amika is on-going and has been as long as anyone can remember. According to history or maybe legend, Amika and Belleger were once one big happy kingdom but twin brothers, heirs to the throne, fell out over a woman and went to war. It has continued. Both sides have sorcerers known as Magisters, rare people with one of six special powers or Decimates.

These are fire, wind, pestilence, earthquake, drought and lightning. Magisters on both sides kill soldiers in droves but stay back from the front lines, using their powers as the armies charge one another. Once the troops are locked in combat, they can’t unleash the Decimates as they would kill their own. Prince Bifalt hates the Magisters, even those on his side, for the distant, cowardly way they kill. Amika, it seems, is bigger, richer and more populous and appears to be winning the war. But now, perhaps, ordinary men have a chance because the alchemists of Belleger have developed repeating rifles. It’s a fantasy with Winchesters!

Then, overnight, all sorcery ceases to work in Belleger. The Magisters lose their power. They assume it is the work of the hated Amikans. Who else? They know nothing of their enemy because no Amikan has ever been captured. Their Magisters kill the dead and wounded at the end of a battle to make sure they can’t be taken prisoner. Now, with Belleger helpless, Amika must be poised to attack. All seems lost but an old Magister tells t King Abbator there is a Seventh Decimate, more powerful than any other because it can stop all the rest. The secret lies in an ancient library to the east. Prince Bifalt sets off on a quest with a small band of loyal troopers and one now powerless Magister to advise.

A magical kingdom, a nice old king, a beleaguered land, a prince on a quest for the power to save them all. Lo, here be all the ingredients of a solid epic fantasy! Prince Bifalt is an ordinary chap who knows he’s not a genius given to defeating his foe with some masterful stroke. He’s more persistent and hard-working than brilliant and not at all sure he’s up to the job at hand. He’s driven by his bitter hatred of Amika and a desire to free his people from the privations of war. The quest takes unexpected turns as Bifalt survives attacks that should kill him. Does sorcery protect him? Why? The answers will change his perspective on the world and the readers, too.

It’s not action-packed, especially in the second half where Bifalt spends time contemplating his choices in difficult and unforeseen circumstances, but a mature hero is no bad thing. Donaldson has been criticised in the past for his use of odd words but there were none here. In fact, the prose was direct, with short sentences and plain words giving it an Asimovian clarity. I enjoyed the book and look forward to part two.