Poor Camellia is living her worst life. Her witch adoptive mother is trying to teach her the magical arts while also attempting to take over the world using a hard to control demon that just happens to have taken over the new boy at school’s body. Camellia has absolutely no talent for magic and wants nothing to do with this evil master plan but her mother keeps making bits of her fall to sleep or turn into noodles if she fails to help. Camellia is also tasked with all the regular household chores such as feeding and cleaning out both the dragon and the werewolf along with gathering any ingredients her mother requires. All in all, things are not turning out well for Camellia, not well at all. 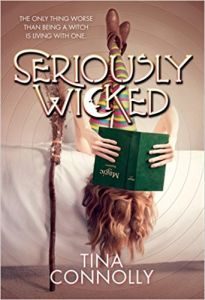 At its very core, this is a very basic story about a girl and the new boy in school. The girl is trying her best not to look too stupid in front of the boy but it all just gets more and more out of control along the way. This book just happens to also have some magical elements which mean that the out-of-control elements really and truly are out-of-control.

I did like the idea of the story that Camellia is trying to stop her mother from taking over the world, while also attempting to get a demon out of the boy she is currently crushing on. There are some interesting background characters but I felt they didn’t really get a lot of development. I liked the background for the dragon but I wanted more of this. In essence, this book had a good premise but it was altogether too short for my liking. This is probably because it’s aimed at a younger market and I’m guessing the publisher wanted it to be a shorter book for that reason. I realise that this is book one in a series but I don’t know that I got enough background to everyone and everything to be that invested in wanting to read further books. But maybe they next couple of books get better. Who knows?

I also enjoyed the way the magic was described as though they are all some kind of algebra sum to figure out. They all look super-easy when you first read them but then the directions for use are really complicated and confusing. I have to say I don’t think I’d be any good as a witch if this were the case with spells. I also liked how there were different types of magical creatures mentioned and we went into a decent amount of detail as to what they could and couldn’t do along with what they would add to any magical spells such as dragon tears.

Overall, this is a very basic book, it’s not bad but it’s also not great. It is a very cute tropey book which is nice and easy to read. It’s nothing new or different as far as I can see but that’s not a bad thing. I’m not sure if I’d want to carry on with the series, but given they’re so short I might.