Scott Gallinghouse’s book title, ‘Scripts From The Crypt: The Brute Man’, is a reference to the final of two films that starred Rondo Hatton although this is really a book about him. I suspect most people know of Hatton from a lookalike make-up played by ‘Tiny Ron’ Taylor in the 1991 film ‘The Rocketeer’ than seeing any of Hatton’s films.

If you’re going to look for films where Hatton had minor roles, then you’ll have to go by their individual names but they are out there. I suspect most people know of him purely from photographs than seeing his films where he finally starred in a series of them as the Creeper. The fact that so many know of the man without necessarily seen his films, myself included, tells more of the impact Rondo Hatton has made on horror fans.

In real life, Hatton was actually only average height and his weight came from his enlarged bones so was often padded out to look larger than he really was. 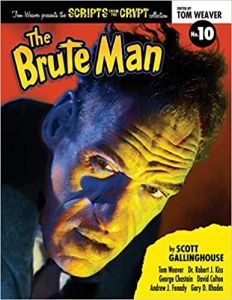 Before he became an actor, Rondo Hatton (1894-1946) was a college sportsperson, rose to second lieutenant in the military in World War One and then became a news reporter. He was also suffering from a medical condition called acromegaly where the hands and feet enlarged and the bones of the nose, cheeks and lower jaw grew larger amongst other things. In fact, his cheek bones were replaced by metal ones early on. It made Hatton look very oddly distinguished and a tad scary but he was a gentle soul.

However his native town of Tampa was not good for his medical condition and he moved to Los Angeles, remembering being told by a Hollywood director he would make money in films and lived up to his promise by hiring him for the films ‘Hell Harbor’ (1930) and ‘In Old Chicago’ (1938). They weren’t big roles but he developed a fan following and popped up in a lot of films. You can read Hatton’s full history here without me going all over it. Gallinghouse points out that there are a lot of inaccuracies about Hatton’s life and even IMdB isn’t perfect on it.

Tom Weaver’s piece focuses more on Hatton’s last two films as the Creeper, ‘House Of Horrors’ and ‘The Brute’, the latter actually being the prequel, both from 1946 and his only starring roles. The bubble bursts here as Weaver reveals that Hatton wasn’t a good actor and couldn’t remember his lines. As he died shortly after making ‘The Brute’, one could surmise he was already dying at that point. I suspect Hollywood was rather more interested in his appearance than any acting talent but it is a sharp wake-up call.

Robert J. Kiss looks into the release history of ‘The Brute’ and how it was widely circulated with a variety of films including UK’s own ‘Dead Of Night’ (1945) which was cut to 77 minutes for US release, losing two of its stories for a time. In many respects, for a poor B-rate film, ‘The Brute’ lives off its reputation than viewing public.

Reading the only existing continuity script for ‘The Brute’ does raise some interesting questions. Firstly, why call it ‘The Brute’ and not ‘The Creeper’ after Hatton’s character. It also demonstrates the American odd incorrect idea where acromegaly came from which also inflicted homicidal tendencies. In this case for the film from a chemical experiment gone wrong. This is as bad as blaming mustard gas for Hatton’s infliction which he breathed in WW1.

If either was the case, then there would be a lot of people with the problem. There is also the reveal of the Creeper’s real name in the script and certain elements paralleling the ‘Frankenstein’ film in the Creeper’s confidante is a blind woman who can’t see his appearance. In many respects, there is some understanding why the Creeper is murdering people who bullied him at school but this is the extreme way Hollywood did things in B-movies back then and still around in some form today. Extreme works is a standard plot prop.

The section on actors and wrestlers who have acromegaly and other problems like gigantism and work in the public eye is quite extensive. This also includes actors who are made up that way suggesting acting skill was chosen over natural appearance. Interestingly, there is a rare picture of Lock Martin sans his Gort costume from ‘The Day The Earth Stood Still’. In many respects, Hatton probably provided the way or influence for actors with less than standard looks into show-business.

The belief that there was no interest in horror films after World War Two appears to be a myth as Gallinghouse points out that the studios preferred to re-release their back catalogue than create any new horror films. Although the book is important to know about Rondo Hatton, this piece will make you think.

Finally, of all the choices for the name for a ‘classic horror award’, Hatton’s face and turned into a sculpture by comicbook artist Kerry Gammill and was called the Rondos. If that isn’t immortality then I don’t know what is.

If you knew little about Rondo Hatton before reading this book then you come away more expert afterwards. It’s even made me tempted to look up some of the films he was in. Hatton might have been a short-changed movie villain as the Creeper but you can’t deny his presence.