I pulled a copy of ‘Science Fiction: Its Criticism And Teaching’ by Patrick Parrinder, not realising it was part of Methuen’s ‘New Accents’ collection back in 1980. Looking on the back cover, its amongst a selection of cultural academic subjects. Parrinder is principally going over the history of Science Fiction but not in great detail.

There is also a reminded in the opening that the term ‘Science Fiction’ was originally sourced from ‘A Little Earnest Book Upon A Great Old Subject’ by William Wilson in 1851, which ensured to me that he had done his research. His take on how the tale of Midas could be converted into SF but it is the solution that makes it SF and not fantasy. Let’s pick some things that piqued me. 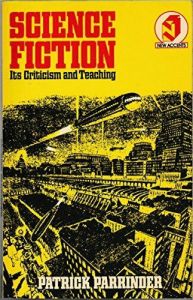 Parrinder’s views that SF fans are not the same as SF readers is an interesting comparison as there has to be some grey area between them. Over 30 years later, I’m sure we can distinguish between SF fans who are only film addicts, those who read books and some who do both but that would also apply to other genres as well. I think I would go further and say this could still do with some investigation today and how tolerant each is of each other.

Any section of society with a special interest wants to see themselves as a formal or even an informal group for communication. Oddly, we geeks are seen as belonging in a different category because we are more analytical. The ‘normal’ SF reader just likes reading SF, often in the old days not realising conventions and such exist or even interested in attending even one of them. These days, that is a lot harder to believe people don’t believe conventions exist but that’s largely because of media awareness.

When it comes to describing novels as a ‘romance’, I do disagree with Parrinder, mostly because most early books were described as this and nothing to do with relationships and more to do with everyday life. Mary Shelley’s ‘Frankenstein’ got the ‘romance’ label simply because there was no other existing label. The same was applied to Bram Stoker’s ‘Dracula’ as well. The genre labelling simply hadn’t caught on back in those days yet, especially for what we call early SF novels as well.

His thoughts on social criticism and its near non-existence today should speak for itself. Have we lost writers with such skills or publishers reluctant to print or promote such work. It does prove looking at the outlook of books such as these to what was happening at the time.

The same back then also applied with SF university courses and that’s changed radically since then but looking at the choice of books given at the time, it’s a short selection. Mind you, I still have to wonder how a degree can make someone smarter than a knowledgeable SF fan.

There is less discussion on stories here although I think this is more to do with the nature and size of this book. Even so there are some things here worthy from a historical perspective and seeing how things have changed in nearly 40 years.

As with all these old SF analysis books, you have to read and remember the context of the times for any insight. My criticisms are more a matter of my own analysis which shows how much you have to think with such books.