In many respects, the fourth and final season of ‘Sanctuary’ is a bit of a mixed bag. The theme throughout is the Abnormals now living on the surface, after their underground home is destroyed are now looking for life on the surface and sun. Not all the Abnormals, though, as many returned underground to rebuild their city. Oddly, few choose the Sanctuaries set up by Dr. Helen Magnus (actress Amanda Tapping), even when an alliance is made. But then, Magnus had travelled into the past to stop Adam Worth/Mr. Hyde from altering the past and had no way back. Although she considered suicide, it was suggested that with her long life to hide away and avoid herself and step back into her life shortly after she vanished into the past. It was hinted that she would take a holiday for the 113 years, it’s only towards the end of the series that we discover that she hasn’t been idle but that’s spoiler. Back in the present, Magnus manipulates a plan to divorce the Sanctuaries from covert government funding with the full knowledge that funds are stashed away. In the meantime, some of the Abnormals are becoming a nuisance and things are pretty much business as usual for Will Zimmerman (actor Robin Dunn) and Henry Foss (actor Ryan Robbins), evading the ill-equipped Lotus Security Force and SCIU forces and dealing with the rebel Abnormals. Ultimately, Zimmerman finds himself working for SCIU and against his former boss, who clearly outmatches him.

Whether they knew it or not at the time this was the last season, they certainly chucked everything and the kitchen sink with a homage to ‘The Thing’ and even to ‘Buffy’ with a singing episode. The Abnormals also have a leader, the notorious Caleb, who is also planning the ultimate double cross. Does that give a hint that a lot of things are going on without too many spoilers?

Occasionally, I think they jump in at the deep end too much without enough build-up as to how things happened but with only 43 minutes an episode and things inferred from the extras, a lot of material does get cut out. Speaking of extras, there is at least 90 minutes of these and some showing how much of the set is green screen. Seeing truly is believing that nothing is quite what it seems. Whether this will become the way all SF series will be shot is still debatable and Sanctuary has now been off the screens for three years now. Then again, considering the number of aliens and Abnormals that are looking for acting jobs in Canada these days, I do puzzle why they aren’t being used across the border. You certainly wouldn’t believe who was playing Spring-Heeled Jack without seeing the extras!

The audio commentary on the final two episodes is shared between Ryan Robbins and Robin Dunn, both claiming to be naked except for wearing boots (I wonder if they heard about Amanda Tapping doing an apparent lack of apparel for a Stargate SG-1 audio commentary?) with the latter describing method farting. Both actors are also concerned about the quality of the coats worn by the cast during filming which might account for their craziness.

‘Sanctuary’ is the kind of series that definitely needs a repeat reviewing to take everything in. At least there is a completion of sorts for the series with nothing left hanging. The performance of all the cast is great and Jonathan Green could really star in a series of his own. No more ‘Come by later’ but at least you can see all of them on DVD. 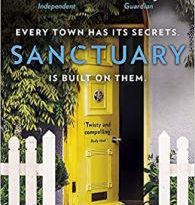 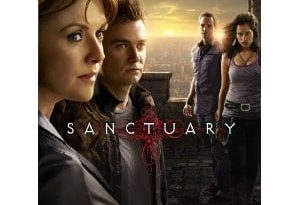