‘Sacrifice’ has a few tense moments and a few ideas borrowed from better-made films, notably ‘The Wicker Man’ but there is not a lot for an experienced horror fan. An obstetrician and her husband move to the Shetland Islands and begin to find clues that something sinister is happening on the islands. Radha Mitchell, veteran of several horror films, stars as doctor acting as detective to get to the bottom of the deaths of women and babies on the island.

The middle section of the film is a bit protracted but, overall, the film is at least polished. Instead of some real horror, which we are told about rather than shown, the film has the tone of ‘Masterpiece Mystery’. Peter A. Dowling adapted the novel by Sharon Bolton and has now directed it on the screen. Special notice should be given to David Grennan’s photography of the islands. ‘Sacrifice’ is a medical thriller that frequently appears inspired by ‘The Wicker Man’ and perhaps ‘The Stepford Wives’. Borrowing from a film as strong and as vital as ‘The Wicker Man’ sets the bar almost impossibly high for making a film at all similar a good experience. ‘Sacrifice’ cannot possibly pay back enough for what it borrows. Peter A. Dowling directs the film from his screen adaptation of a novel by Sharon Bolton.

Obstetrician Tora Hamilton (played by Radha Mitchell) desperately wants a baby of her own, but cannot bring a baby of her own to term. After a miscarriage, she decides to simplify her lifestyle. She retreats with her husband Duncan (Rupert Graves) to the Shetland Islands where her husband is from one of the first families. Tora’s father-in-law believes he can arrange for Tora to adopt a baby right on the islands.

Tora is not on the island long when a dead body is found in a bog that may have preserved it for just a short time or for decades or even longer. Tora’s background in medicine tells her much about the body that the police did not see. For one thing, the body had given birth a week or so just before the killing. In a bizarre touch, the police did not catch, the body was carved with runic symbols. Tora is intrigued and begins her own investigation. This constitutes a good first act of the thriller. Sadly, the second act is slow and mostly constitutes a surprisingly prosaic investigation with long sequences of Tora sneaking down stairways and around hallways.

The viewer gets little more information than is necessary to tantalise the viewer. The killing of the dead woman fits in surprisingly close to legends from the area. Could this be a revival of very old and barbaric customs on the Shetland Islands or could there be a more recent origin of the crimes? Tora is determined to find out. Along the way, she learns of the misogynistic attitudes and practices that once were once common on the island and still hang on by tradition. There are also hints of demonic fairies, the Trows, that were believed in on the Shetlands.

The film builds to some medium-surprising reversals toward the end but not strongly enough to pay off for the viewer. This is a film that has potential to be an effective piece of horror but it is kept rather prosaic in spite of what could have been intriguing ideas. There are times the viewer might not be sure where the story is going but none of the places are all that interesting. If you are going to borrow from a film as good as ‘The Wicker Man’, at least make the borrowing worthwhile, fresh, and new. I rate ‘Sacrifice’ a high +1 on the -4 to +4 scale or 6/10. ‘Sacrifice’ will be shown at the IFC Center in New York on April 29. It will be released to DVD and VOD that same day. 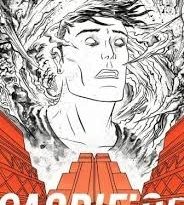