Bat-like aliens are found in the tail of Halley’s comet. Also, there are three aliens that look like two human males and one beautiful woman. They are part of what may be an alien invasion force. These first aliens are to seed the planet with a colony of vampires, growing geometrically. Tobe Hooper directs a screenplay by Dan O’Bannon and himself with several interesting ideas and touches. R 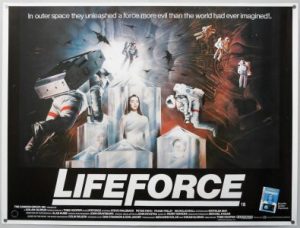 ‘Lifeforce’ is a film destined never to get the respect it deserves. This may be because it has one long sequence in which a woman is naked. Some Science Fiction fans seem unable to look beyond the nudity to see the story being told. At a Science Fiction convention, I was talking to one of the speakers and somehow the film ‘Lifeforce’ came up. I said that I actually see a lot of ideas in the film. The speaker turned to me and said in a loud voice, ’DON’T EVER TALK TO ME ABOUT FILM AGAIN.’ I haven’t.

Outside a small cult of film fans of ‘Lifeforce’, gets little praise. Mostly it is the butt of humour for the one nudity. Actually, I would tell the people who were amused by that touch that they should get over it. There is a lot of nudity in art. It makes sense in the context of the film. Mathilda May’s character is Patient Zero for an epidemic of human vampirism. No film I have seen has dealt so deeply in Science Fiction coupled with metaphysics since ‘Quatermass And The Pit’. 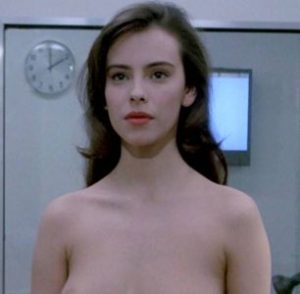 ‘Lifeforce’, with its philosophising about the metaphysics of life and death, is inevitably a film of narrow appeal. Few audiences want to be told about suggested definitions of death. Also the film’s most audacious ideas are not entirely made clear to the viewer until the end of the film and possibly not even then.

The story keeps the viewer guessing where it is going and following a series of twists of the plot. It is radically changes in style every ten minutes or so. It can be, by turns, a disaster film, a detective film, a zombie film or a murder mystery. There is more than one occasional tip of the hat to Nigel Kneale and his ‘Quatermass And The Pit’.

Henry Mancini provided the main musical theme of the film. Somehow, it does not seem to go with any of the moods of film director Tobe Hooper’s work. It does have a brash adventurous feel. Perhaps it would be suited to a swashbuckler story.

‘Lifeforce’ has become a cult film, but does not have much audience appeal beyond the selective cult and it loses some respect with its naked Mathilda May. But I would call this an audacious SF/horror film. I give it a +1 on the -4 to +4 scale or 6/10.

What is it all about? Go with me on this one.

The aliens have come to Earth to create and culture human lifeforce as we might culture cheese.

How is cheese made? You take perfectly good milk and introduce to it just a tiny amount of cheese starter culture. Then the cheese culture will grow and spread out. It infects the milk and as it goes it will create more cheese culture, which will infect more milk. Soon you are left with little or no milk and a lot of cheese. Humans do not consider the process of cheese-making to be in any way immoral even though we destroy a lot of micro- environment lives in the milk. This is just how cheese is made. We do not worry about tiny individual lives of the life-forms consumed by the process are considered beneath worrying about. When the process winds down it stops.

In ‘Lifeforce’, this is almost the identical process the aliens are employing. They probably consider the humans to be beneath their consideration. They need lifeforce to live. Rather than introducing cheese starter culture to milk, they introduce vampires to the human race and then they just sit back and let vampires suck up the lifeforce from their victims but vampires can hold lifeforce for a limited time only. They suck it in and then release it. The aliens just suck up the big pools of lifeforce.

The aliens do not concern themselves with the chaos they are causing on the planet. They just follow the recipe and suck up the lifeforce left by the vampires. When their source dries up they just seem to close up the huge collector and silently float away, probably to their next source.