‘RetroFan’ covers have been in the TwoMorrows promotion literature for some time. Unlike their more comicbook-orientated magazines, this one focuses on TV and merchandise of not only super-heroes but also anything that would have ‘cult’ interest associated with it. So, if you’re been watching TV since the 1960s and much of American product has appeared in the UK, then there is plenty here to draw your attention. Editor Mike Eury also points out that this won’t stop them looking further afield into the 1940s and 1950s. It does make me wonder how long before they start looking at British imports. Just seen the announcement for the next two issues, we get ‘Thunderbirds’ in # 3. TwoMorrows plan that far ahead and thus living up to their name. 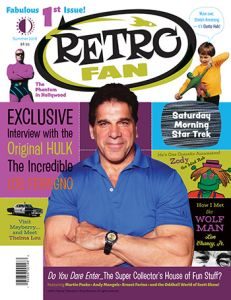 As the cover shows, for openers we have Mike Eury interviewing Lou Ferrigno, the first live TV ‘Incredible Hulk’. I think the most interesting aspect was him talking about the long hours spent being painted and staying green which was in its infancy back in the 1970s.

I only have vague memories of ‘Stretch Armstrong’ and the bevy of super-heroes given the same kind of body and arms. I didn’t realise their body contents was made of corn syrup. Although it’s explained that the failures were kept in the warehouse, I do have to wonder how many kids pulled them until they broke or squeezing them back into shape come to that. Any of you owning an ‘Incredible Stretch Hulk’ in your youth should check out your attics as they’re very valuable these days.

Martin Pasko’s look at ‘The Phantom’ reiterates something I wrote in an article decades ago in that the Ghost Who Walks predates the Batman by three years. I would disagree with him about purple not being good camouflage in the jungle. Pasko points out that the Phantom originally was supposed to be active at night and purple is actually a good choice, although I’m less sure about his striped pants. Even in daylight, in deep foliage, purple is still a concealing colour. I hadn’t realised that Bangalla was originally supposed to be Asian and not African. I still have some fondness for the Billy Zane starring 1996 film, more so as its one of the last that didn’t rely on CGI for stunts.

Andy Mangles looks at the ‘Star Trek: The Animated Series’ in more detail. I think what put me off during its day was the used of stock shots, even though that was largely to keep costs down and a 50 foot Spock breaking the Square-Cube Law. Even so, I can appreciate the fact that one of the other episodes did win an Emmy.

There is a major feature on ‘The Andy Griffith Show’ which I don’t think was ever shown in the UK, although we did have the ‘No Time For Sergeants’ series. I saw the original film again a few years back and it’s still funny if you can lay your hands on a copy. Mike Eury has a quick poke around the Andy Griffith Museum and interviews Betty Lynn who played Thelma Lou. A look at the small range of merchandise/collectables is put down to Griffith being part-owner of the series and dismissed most of them. Something I hadn’t known was the child star of the series was little Ronny Howard.

As with all first issues, ‘RetroFan’ is no exception with some odd choices of material. Scott Shaw! has a look at Gold Key’s ‘Zody The Mod Rob’ comic which only lasted one issue. Zody is a modern, for 1970, robot although you do have to wonder what he was taking for oil.

Finally, we have a look at Tom Stewart’s various collections, all with photos. Mike Eury has an open message that if you are a super-collector with big collections then you should get in touch after reading this issue. I suspect that alone will keep this section of the mag going for a long time.

‘RetroFan’ is clearly in its early days but if you’re hell bent on nostalgia then this mag is clearly meant for you, which means most of us here.