‘Relic’ by Renee Collins has an awesome setting. The world has been blighted by a long forgotten catastrophe that buried mythical creatures and the magic they possessed beneath desert. The bones of the extinct creatures, the dragons, unicorns and sirens, are revered for their residual magic. A piece of any is known as a relic and with it, a talented practitioner can perform magic.

Someone is using a powerful relic to scour the land with unnatural fire and the local Apache are being blamed. It’s well-known that they object to the mining of relics. They see the extraction of the bones as disturbing the Sacred Ones.

Maggie, who loses her family to one of these fires, has an affinity for relic magic. Properly trained, she might be able to figure out who is using the relics for evil purposes. Before she can realise any such goal, however, she has to settle herself and her sister into a new town, find reputable work and figure out what to do about a very attentive cowboy.

‘Relic’ is an odd combination of western, romance and fantasy. I’ve never read anything quite like it before. The magic system is different and intriguing. I love the concept of the relics, the bones of mythical creatures and the residual magic. I also like how Collins tied the magic to the type of bone. Unicorn horns heal and siren bones are used for water magic and beguilement.

What did not appeal so much was the western flavour. It was well done; the setting felt authentic. Just wasn’t my thing. I do think ‘Relic’ has a lot going for it, however. It’s different. In a market where books for teens are plugging one dystopian setting after another, the western setting and definite parallels to the conflicts between pioneers and American Indians makes a refreshing change. 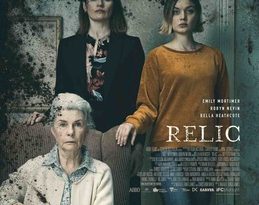