‘Redspace Rising’ by Brian Trent is second novel in the ‘Ten Thousand Thunders’ series. This is a far future thrilling adventure, mystery and space opera all rolled into one. 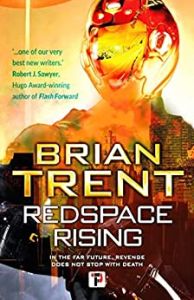 Harris Alexander Pope, shadowman (special ops) for the Partisan faction on Mars is brought back to life after being killed in raid. However, he is not quite the same man: he has been reactivated as a sleeper agent for the Order of Stone. His mission is to destroy the near impenetrable Partisan headquarters on Mars’ moon, Phobos, and kill all the Partisan leadership in the process. He is given an anti-matter round to destroy the moon’s fusion reactor and Gethin Bryce, the most wanted man in the Solar System, as a prisoner to escort there.

Of course, he succeeds, killing everyone there. He is welcomed home and feted as a hero by the Order of Stone, which includes General Pope, his elder brother. Had he succeeded in this era when a ‘Save’ could be uploaded into a new body, cloned or otherwise? No, the leadership had all been resurrected into new bodies and Harris Alexander Pope has to hunt them down.

‘Redspace Rising’ is what I call a multi-layered novel. A fast-paced read that lets you enjoy the thrill of the hunt or you can take your time to relish the multitude of thought-provoking ideas and issues. An easy-to-describe but profound example is, ‘…when you live long enough, you don’t react the way younger generations do. You’ve seen so much, for so long, that it reshapes your emotional parameters.’

The novel is packed full of futuristic themes (AIs, shapestone, space elevators, O’Neill cylinders and much more) but what I, speaking as an engineer, particularly liked was the way these themes were allowed to interact with each other and how the legacy of the history impacts them. This is a world-building in a depth rarely seen in Science Fiction, and speaking from experience, very difficult to achieve. Brian Trent does this and gets it across to the reader with seemingly ease.

Brief references to classic history and mythology are peppered throughout the novel. It was annoying until the explanation of background came over half-way through. Then it all made perfect sense. What is remarkable is that this kind of ‘not explaining a theme’ until late in a densely idea-packed novel it was only noticeable for such a minor issue, a feat in itself.

I find myself thoroughly agreeing with Robert Sawyer’s assessment of the author, ‘Brian Trent is one of our very best new writers.’ ‘Redspace Rising’ is one of the best gritty space opera novels I have had the pleasure of reading. 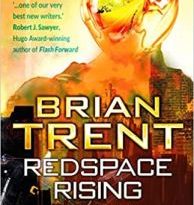