‘Portal’ is a Science Fiction photonovel, which is to say it uses photographs of real people and animals to tell the story. While some of the photos have been edited the majority appear to be original with perhaps no more than a little cropping. The photos themselves are of a very good quality which with the overall design and layout give Portal an exceptional production quality. The front cover credits Andrew Paradigm (writer/creative director/executive producer), Mark Palermo (photographer/producer) and Christopher Sullivan (art director/producer) but there quite a few other people involved in creating the finished article which are mentioned in the credits at the back of the novel. The cast of actors also gets listed and there are quite a few of those as well.

‘Portal’ tells the tale of a genius maverick serial inventor Nicholas Fort. His latest invention, the Portal, has the potential to be revolutionary impacting just about everyone’s daily life. Being such a revolutionary device, it attracts the interests of US senators and unscrupulous business men. A lot of people have vested interests in the Portal for good and bad reasons with some calling for an out-right ban on the device. I can’t say too much more about the plot without ruining it, so I’ll keep quiet on that regard.

Once you get over the visually stunning appearance of the novel you have to ask; does it tell a good story? Well, yes it does eventually but the reader is going to have to put some work in to get the most out of this story. It is the type of novel which requires more than one reading. This is largely due to the story segments being divided into various sections which occur at different points on the time-line. However, they are presented together but with no real indication that some sections precede others and the reader is left to deduce this. I also thought the bad guys were a bit formulaic being just your average, standard, mega corporation bad guys.

Personally, I found the story confusing on the first reading, clearer on a more considered second reading and even a third reading uncovered things I had not seen previously. While there is an ending of sorts, it is fairly open, leaving the way clear for another volume to pick up on some of the loose threads.

If I were to have to pick fault with the visual presentation it would be with the font used for the characters conversation. I found this quite tiring on the eyes after a while but it is really a minor quibble with what is a visually stunning novel. I’m glad I had the opportunity to read ‘Portal’ and will be looking out for the following work. 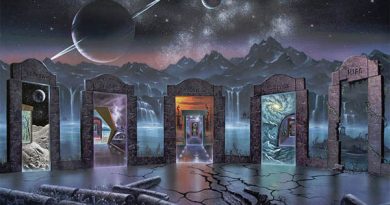