‘Perihelion SF’ is an on-line magazine, free to read, that publishes Science Fiction only, so no fantasy or horror here. It is inclined to be humorous but more serious subjects also feature. The fiction is listed in order of my preference, which may not be yours. ‘Places We Call Home’ by Amy Sisson is narrated in the first person by Bronwyn Wilson who was raised from the age of twelve on Radu IV. Her sister, Faren, was raised from babyhood on that other planet with no memories of Earth and had an alien nanny. She doesn’t adapt well when the family move back to old home, Terra. Raduans are the sort of lovely, cuddly, civilised vegetarian aliens we all want to meet and Faren prefers them to humans. A moving story of self-sacrifice.

‘Locked Out’ by Geoff Nelder starts with astronaut Kiu on a mission to monitor a comet striking Mercury. He’s outside the ship trying to repair communications equipment while Suzi is onboard. Then he gets locked out and there are a series of clever plot twists.

In ‘Jogging Alien’s Guide To Weight-Loss Dating’, a Washington press secretary named Ben Shankly is put out when told that an alien wants to date his daughter and she has to go, for the sake of her country. Ronald D. Ferguson extracted a lot of humour from this situation and managed a good ending, too.

‘Last Close Encounter’ is told in the form of an interview, twenty years after the event, with the two beings who conducted Earth’s first contact with an alien race. Realistic in terms of how politics and the media operate and entertaining, too. Congratulations to Brandon Klimack on his first sale. Stephen King said: ‘If you wrote something for which someone sent you a cheque, if you cashed the cheque and it didn’t bounce, and if you then paid the light bill with the money, I consider you talented.’ Cheques are nearly gone now but the sentiment is clear and I agree with it.

The other two stories in this issue were interesting but left me slightly bewildered. However, I am easily confused and they are decent enough yarns. ‘Drone Bee’ by Kathleen Molyneaux is about big agribusiness dirty tricks in a future with robot bees, the real ones being extinct. The science was a bit beyond me on this one.

The other least favourite, which doesn’t mean bad, was ‘In Real Life I Wouldn’t Hurt A Fly’ by Anya Ow. R3ality is a VR world and everyone’s plugged into it. To say more would give away the plot. The characters were well-rounded and there were interesting developments but I have a prejudice against unreal stories, if that makes any sense in Science Fiction. I don’t even like the ‘Star Trek’ episodes set in holosuits. However, this will indubitably be many a reader’s cup of tea.

There are three good shorter stories, too, and all this fine fiction is backed up with reviews and an interesting editorial by Sam Bellotto, Jr. about coping without power for a few days. Sometimes it’s useful to keep those old technologies in the spare room or garage. There’s also a good article on ‘Downloading Great Audio’ by Eric M. Jones which tells you where to find classic SF radio dramatisations galore.

This treasure trove is completely free to any cool cat with a mouse and a computer attached to it or a laptop with a mouse pad or one of those swipe screen smartphone things you young people spend all day fiddling with. The options are endless. 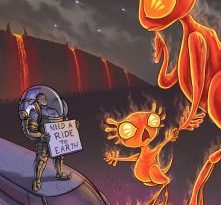 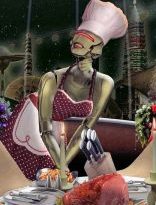