My girlfriend wouldn’t have got past page one, the hanging dog. I mention this because if you’re the sort of person that wouldn’t get past page one you’ll regret buying the book and I don’t want to mislead anyone. If you’re not fazed by that and worse then it’s a good read about finding some humanity in a violent world. 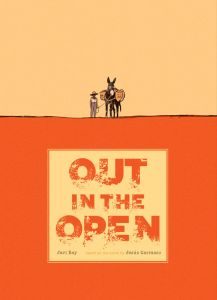 This graphic novel adaptation of ‘Out In The Open’ opens, like ‘East Of Eden’, with a description of the landscape in which the story takes place. ‘The town was built on the bed of a broad gully down which water had flowed at some point. Now it was just a long hollow in the middle of an endless plain.’ The original novel doesn’t open like this (I checked), so clearly, writer Jesús Carrasco isn’t following it exactly, though he does begin the actual story with the same scene, the boy hiding in a hole and listening to his pursuers.

They include his father and the sheriff. His father beat him regularly but no doubt pretended to the town that he was terribly missed. The sheriff…well, you’ll see. The boy has no food or water and the only escape route is across a baking hot plain. Fortunately, he finds a wise and kindly old goatherd who is going that way and helps him. Unfortunately, his pursuers don’t give up. Meanwhile, in his dreams, he remembers the terrible past.

Javi Rey’s art is rendered in an attractive linear style decorated with faded pastel colours and seems perfectly suited to the material. His storytelling is clear and vivid. The boy’s nightmares are painted with a more limited palette, mostly one colour, to distinguish them from the rest of the book. The story is terrific but there are brutal scenes. Mind you, each is limited to a panel. This is not a gore-fest but a short, sharp shock. It’s nowhere near as violent as the average Judge Dredd story but that’s cartoon violence and doesn’t feel real. The true-to-life nature of this story makes it harder to take. For all that, I must emphasise that there are humanity and hope as well.

The story takes place in an unnamed country and unspecified time. Although it features a motorised vehicle there are no SF trappings and the general look is primitive. The townsfolk go to mass and the landscape is barren and dry so for me it was Mexico.

I hope someone films it. Thanks to Javi Rey’s striking art, I can easily visualise’ Out In The Open’ as a spaghetti western from Sergio Leone with music by Ennio Morricone. I see Jack Elam as the boy’s brutish father, Lee Van Cleef as the evil Sheriff and Spencer Tracy as the wise, grizzled old man. Unfortunately, I think all these people have moved on to that great cinema in the sky and I don’t know enough about modern film to cast it otherwise.

Recommended as long as you’re not of a too sensitive disposition, though if four or five panels don’t make you feel a bit ill then you’re of a too brutish disposition and possibly a psychopath.