I had always understood that a prequel was something produced after the main action but returning to earlier chapters in the characters’ lives. The ‘Star Wars’ prequel trilogy hit the screens more than ten years after the end of the original trilogy and, however much it is despised, the film ‘Prometheus’ is a prequel to the ‘Alien’ sequence, written/produced after, but set before the established time-line.

Thus it comes as a surprise to see ‘Nine Of Stars’ advertised as the first of the ‘Wildlands’ sequence when there are two previously written and published novels with the same principle characters labelled as prequels. It is disorientating and disconcerting for the potential reader. This is a marketing issue. 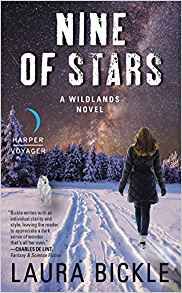 Nine is a wolf, a member of the Star pack. They are the remnants of a tribe of skinwalker shamans who have forgotten how to change back to their human shapes. As the novel opens, Nine and her pack have problems. They have been driven to hunt in Yellowstone National Park in a very bitter winter and they are hungry. Warmer and shorter winters of earlier years means that their natural prey has had the chance to be better fed and there are not the weak members of a herd straggling behind ready for the wolves to pick off. To add to their problems, they encounter a stronger adversary who kills and skins a pack member they cannot really do without. This is a supernatural creature.

While not a lot of time is spent with the pack after the opening chapters, they and Nine in particular, become essential to the plot. While the wolves are new characters, the humans are not. To understand who they are and where they are coming from it would have been useful to have known that reading the prequels would have helped.

Petra Dee is a geologist working in Yellowstone. Her father, now in a nursing home, is an alchemist. Petra is usually accompanied by Sig, a coyote, who is probably much more than a common cannid, though his true nature is not, as yet, fully explored. Her bed-partner, Gabriel Manget, is human, though, having lived and died long before Petra was born. He was a Pinkerton man sent to Temperance, the nearest town, to investigate a man called Lascaris.

Owen Rutherford is the sheriff of Temperance and cousin to Sal Rutherford, a local wealthy rancher. He has problems and is haunted by the ghost of a child who is waiting for him to catch her killer. He is also investigating the mysterious death of his cousin for which he is sure Gabriel is responsible and now has a wolf killer to contend with. Plus, he is Sal’s sole heir and is being influenced by the proximity of a supernatural evil he doesn’t understand.

Petra has her own problems. At the start of this novel, she is diagnosed with leukaemia and this is a constant undercurrent to the plot. She, too, is determined to catch the wolf-killer, a resurrected spirit known as Skinflint Jack, and to protect Gabe from Owen’s pursuit of him before she will even consider undergoing treatment.

‘Nine Of Stars’ is a welcome change from the current crop of urban fantasy as it takes the action out into the wilderness in the midst of winter. Petra is a very human protagonist and, even if her life is falling apart, she retains clear ideas of her objectives. The novel blends alchemy, magic and the spirits of the animals that owned the land before people arrived. The atmosphere of bitter cold in maintained throughout and the result is a very readable book with hidden depths. 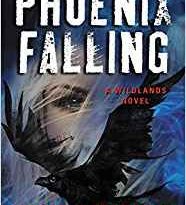 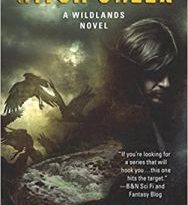