At the end of Jay Posey’s debut ‘Three’, the first book in ‘The Legends Of The ‘Dustwalker’, I got the impression the titular character, Three, couldn’t possibly be the dustwalker of legend, which both surprised and saddened. He was a compelling figure and the entire plot hinged upon his actions. Three embodied the role of the brooding loner who repelled all comers with one of a variety of weapons, mental and physical. Cass and her son, Wren, got under his shell, however, and together, they completed a journey across the post-apocalyptic wasteland of Posey’s imagination. The interwoven plot threads led to an exciting conclusion that simultaneously unravelled and deepened every character involved. Then something unexpected happened. I’m not going to elaborate here, as that would spoil the book for new readers. Suffice to say, Three does not head the cast of ‘Morningside Fall’ and that is pretty much the major problem with the book.

Once again, Cass and Wren are compelled to journey across the wasteland between sanctuaries. Tension is running high in Morningside. The residents are not happy about the influx of people from beyond the wall and the reawakened Weir returned from a zombie-like state to almost human. There is also a plot afoot in Morningside to wrest power from the new young governor. After attempts on his life, Wren gathers those still loyal to him and sets off to find a safe place to hide. His mother, Cass, meets them on the road.

This time, the Weir are smarter and weirder. They’re coordinated and more vicious than before. They have also acquired chant, the meaning of which saves this book from mediocrity. In the last quarter, we finally ‘meet’, properly, the blindfolded figure from the front cover and learn who is organising the Weir. From that point, the battle is on.

Not that there isn’t enough hack and slash in ‘Morningside Fall’. There is. It’s the stuff in between that is lacking. A lot of Cass and Wren reassuring one another, which, I’m sorry, got old after the first fifty pages and I’m a mother. I think what their relationship highlights is the fact Wren is young. Too young to be governor of Morningside, regardless of what power he holds. He’s a kid and while post-apocalyptic settings are great for robbing childhoods, Wren still felt too much like a lost child to really lead the book.

I wanted Three or his replacement. I wanted the guy in the blindfold from the front cover. Until the last quarter, the book lacks the leadership of a compelling character, one that I could probably empathise with.

Still, the concluding pages of ‘Morningside Fall’ are pretty epic and set up the next chapter very well. It’s just a pity it took so long to get there. Despite my disappointment in this book, I will be reading on. Posey has constructed a really unique world, one that steps to the side of the usual zombie tropes and provides an apocalypse that’s at once unfathomable, but also believable. That’s no mean feat. 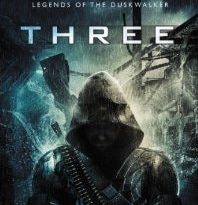