I think my first encounter with Mike Ploog’s comicbook artwork was with Marvel’s ‘Man-Thing’, although I knew a little more about his animation background later. With the nineteen volume of ‘Modern Masters’, it seemed too good an opportunity to see more of his work and background. 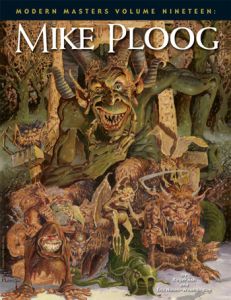 Mike Ploog was born in 1942 in a remote town in Minnesota and very much an outdoor guy, finishing his education early and working with horses before joining the military, developing his reputation there with his art. He later worked on PS Magazine under Will Eisner as he had a similar cartoon style. It was only lack of money that made him move on and working his way up the ladder in animation. For comicbooks, one story for Warren Magazines and a stretch at Marvel before returning to animation.

I think the reason I missed some of his earlier work there was because I hadn’t gotten back into comics at that time. Considering his dislike of drawing motorbikes when he was on ‘Ghost Rider’, I still have strong memories of a hog bike he drew for ‘Ghost Rider’ that was on the back cover of one of Marvel’s ‘FOOM’ magazines.

However, when Ploog went back into animation and doing storyboards, he is also designing and the number of films he’s been involved I was staggering by how much work he did. A problem with the credits of any film these days is that they are so long and many that I doubt if anyone reads them anymore. Starting off with Ralph Bakshi’s ‘Wizards’ and ‘Lord Of The Rings’, he also did some work on ‘Superman II’ and ‘The Thing’, which aren’t animation, You can buy this book for his full list but I think, for me, the biggest surprise was his work on ‘Shrek’.

Soon as you read that, see the designs and things click. Of course, it looked like Ploog but, then, it is Ploog. In many respects, Ploog was there for design as much as storyboarding. Later, he also returned to drawing comicbooks and is still there today. Well, at least in 2008 when this book was released.

The back of the book has a 45 page art gallery, including a colour section, showing a variety of his comicbook and animation design work. Analytically, it’s rather odd to note that Ploog is known more for the fact that he rarely drew super-heroes but more for his fantasy work, although quite where his work on ‘The Spirit’ remains will be harder to locate. His artwork is a joy to study and he builds exotic backgrounds as much as his characters and you have to love his eye for detail.

Get it in the UK from https://amzn.to/2XTlYdO

Get it in the USA from https://amzn.to/3eB4Oax