James Bond has S.P.E.C.T.R.E and now the IMF’s Ethan Hunt must track down The Syndicate, a secret organisation committing terrorist acts to somehow bring about something like a new world order. The latest ‘Mission: Impossible-Rogue Nation’ film is toned down a bit after the last effort and the villains are more reserved but, even restrained, they are trouble for Hunt. Christopher McQuarrie writes and directs the fifth high-octane entry in the ‘Mission Impossible’ series.

In the ‘James Bond’ series, Eon made the flamboyant, silly and not very good ‘Moonraker’ and then realised they could not keep doing such comicbook-like stories. ‘For Your Eyes Only’, the next film, was much lower key at least compared to other Bond films with no mad scientists trying to destroy the world. The ‘Mission Impossible’ producers probably made a similar decision after their ‘Mission: Impossible-Ghost Protocol’. They dialled the flash down quite a bit to have a slightly more realistic story or their fifth entry, ‘Mission: Impossible-Rogue Nation’. This is not to say the film is anywhere near sedentary. There is limited use of super-spy-gadgets, not stressed or pre-introduced in a sequence as they would be in a Bond film. There are fewer stunts, though 53 year-old Tom Cruise can still put on an exciting show. The first stunt probably outclasses the best that Bond has ever done. For writer/director Christopher McQuarrie, fewer stunts and gadgets mean more time to tell story. Much of the time is spent with an attractive secret agent, Ilsa Faust (played by Rebecca Ferguson), who is on somebody’s side and it just takes a while for Ethan Hunt to figure out on whose. The villains are kept non-descript and certainly not as flashy as they would be in a Bond film.

As the film opens, Ethan Hunt (Tom Cruise) is just preventing terrorists from getting a shipment of nerve gas in artillery shells. His method is to drop the shells by parachute from a plane. To me, this seems a really *bad* idea, but the film moves so fast it goes unnoticed. He suspects that behind the sale there is a new international crime syndicate called, imaginatively enough, The Syndicate. They seem more engaged in what nasty things they can do than they are figuring how to profit from their chicanery. I did not mind that The Syndicate was trying to bring about a new world order, but it a little hard to understand how the terrorist acts would accomplish that. Meanwhile, the United States Government is continuing the process of disbanding and eliminating the Impossible Mission Force. A Senate oversight committee wants to make the IMF a branch of the CIA so that it can be better managed on a shorter leash. At the same time, Hunt is off looking for a man who may be involved in The Syndicate, one with light hair and glasses. ‘Mission Impossible’ stories just do not take the liberties that Bond films take and so are a little more plausible. The action scenes are no less filled with flash, but there is a little more space between them.

One of the major set pieces of the action is a backstage fight during a performance of Puccini’s ‘Turandot’ (a personal favorite of mine). This film is a Chinese co-production and the opera ‘Turandot’ is a pseudo-Chinese fairy tale with some traditional Chinese musical themes mixed in. McQuarrie borrows from the climax of Alfred Hitchcock’s ‘The Man Who Knew Too Much’ (either version) building to a gunshot at a musical crescendo but here it is at the end of the popular aria ‘Nessun Dorma’. Then through the rest of the film the music score by Joe Kraemer has little snatches of ‘Turandot’ and the ‘Mission: Impossible’ theme mixed in.

Cruise stays remarkably young-looking, particularly when he is performing stunts that would kill most men a couple of decades younger. Here Rebecca Ferguson as Ilsa Faust nearly matches him physically and perhaps has an edge on him in intelligence. I have liked actor Simon McBurney ever since he played an enigmatic figure in ‘The Last King Of Scotland’. He is still playing enigmas, perhaps because he distinctively does not have film star features. He has an out-of-the-ordinary face and gives an out-of-the-ordinary performance.

There is nothing in this film I would call a ‘rogue nation’. North Korea is my idea of a rogue nation. There are rogues in the film, but a distinct shortage of nations. I am not sure what in this film they are even applying the term to.

Everything about a ‘Mission: Impossible’ film seems to compete with the ‘James Bond’ series. Even if it bested that series, I am not sure it would be noticed. You cannot beat a myth. I have never been fond of Tom Cruise, but one must admit what he does he does well. I rate ‘Mission: Impossible-Rogue Nation’ a +2 on the -4 to +4 scale or 7/10. 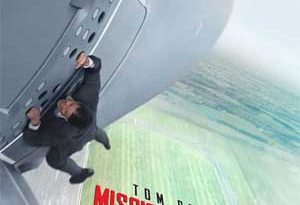