Jake’s grandfather, thought to be suffering from dementia, tells the most fantastic stories of his fighting of monsters during WWII from an island off Wales. These stories lead Jake to the island and there he holds the balance of power in a war between children with strange special powers and supernatural villains. The plot is surprisingly complex and frequently obscure, but visually the film is imaginative. Tim Burton directs a screenplay by Jane Goldman, based on the young adult novel by Ransom Riggs.

Jake grew up on his grandfather Abe’s stories of fighting monsters when the old man was posted off the coast of Wales during the Second World War. Then Abe (Terrence Stamp) is killed with his last words being a cryptic message for Jake. The boy has a hard time convincing his parents to let him go, with his father, to his grandfather’s island. The story has started slowly and here is picking up speed until a fast-paced fight. Well, without fights. What is the point of having characters with super powers?

‘Miss Peregrine’s Home For Peculiar Children’ could well have started as a different approach to the team-of-super-heroes sort of story with still the feel of a young reader’s taste. The heroes here (we don’t call them mutants) have different sorts of powers. One controls bees that seem to live inside him; one has power over air (including incredible lungs); one is a little closer to the Marvel- style hero, being invisible; one has super-strength and yet another has the power to make vegetables grow fast. The twins can…no, that would be telling. Then there is Jake (played by Asa Butterfield). He is an outsider and he does not seem to have any powers at all. All are loomed over by Miss Peregrine (Eva Green), who is a shape-changer and who can be either as innocent as she seems nor as sinister as she appears.

Beginning with his short film ‘Vincent’ (1982), Tim Burton has frequently used a particular visual style. Do not ask me to describe it, but I know it when I see it. That style is conspicuously absent from the new film. One thing we do see is some stylistic allusions to other fantasy filmmakers. The conjunction of school yards and bombs from Guillermo del Toro’s ‘The Devil’s Backbone’ makes itself noticed. Creatures with long spindly legs from ‘The Dark Crystal’ do, too. Toward the end, we get a very nice reference to a famous sequence from ‘Jason And The Argonauts’.

The general look and feel of the film changes as we go from one setting to the next. That turns off some parents, but the kids seem to like it. The textures of the visuals change rapidly with the settings. We go through different worlds as we go from suburban Florida to a Welsh island to a gardened country house. By the end of the film, we are in a battle on an amusement pier in Liverpool. Meanwhile, the film is playing with time and the basic physics of the universe.

Some of the images may be inappropriate for the younger crowd. There is one scene that once thought of, Burton must have felt compelled to shoot, in which there is a feast of eyeballs. This is one of director Tim Burton’s better films since he lost the writing talents of Caroline Thompson, who had humanised his exercises in weird visuals, good though some were. Burton has a first class cast including Samuel Jackson, Judi Dench, Rupert Everett and Allison Janney. It does not have the same sort of delights as The Nightmare Before Christimas’, but it has its own charm. I rate it a +2 on the -4 to +4 scale or 7/10. 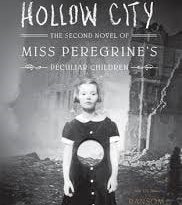