Under consideration here is the ‘Marvel’s Agents Of S.H.I.E.L.D.’ soundtrack composed by Bear McCreary. Now the thing with movie and TV programme soundtracks in general (I’m not talking about musicals here), is that they were written as supporting material. They were not conceived as something separate from the film/TV program, to standalone by themselves. That leaves me unsure as to who buys them. Surely the viewer’s first priority is watching the on-screen action with the soundtrack adding ambiance and adding emphasis at certain points. Not many people I have spoken to have identified the soundtrack as something notable in its own right. They all talk about the on-screen goings on. Anyway, with this soundtrack you get 18 tracks composed by the very busy and talented composer Bear McCreary. While they were composed for the TV programme, I found the album to be very enjoyable on its own. The soundtrack is orchestrated and quite strident in places but the work is of such quality that you can just put it on, sit back and really (I mean really) listen to it. It also works perfectly well when you put it on in the background while doing something else like writing reviews for example.

You are treated to tracks with bewildering titles which must be from the episode or moment in the TV program they were created for. So, for example, track 4 is ‘Rocket Launch’, track 11 is ‘Alien DNA’ and track 12 is ‘FZZT’. Now I know there must have been a lot of thought placed into creating the running order of the tracks but it works just as well on my iPhone (other music players are available) with the shuffle turned on.

I have to admit, I was highly sceptical when asked to review this as I was disappointed with the soundtrack to ‘Lord Of The Rings’. I didn’t think that one worked as a standalone entity but this soundtrack does. I’ve listened to it quite a few times now and really like it, which is saying something as it has very little orchestral company in my music collection. I might have to get some more of Bear McCreary’s work but, for now, I’ll just listen to the ‘Marvel Agents Of S.H.I.E.L.D.’ soundtrack one more time. It’s recommended. 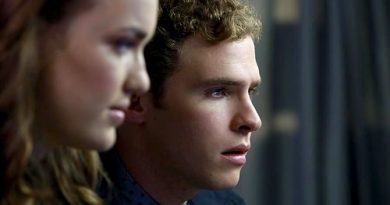 London Comic Con special: S.H.I.E.L.D. us from all the pranks.

London Comic Con special: S.H.I.E.L.D. us from all the pranks.