The idea of alternative histories and parallel worlds are tropes that have been common in SF and fantasy literature for a long time. The thing that has changed over the centuries is the way the protagonists reach the alternative world. Initially, it would have been through dreams or magic. Now, more elaborate and often pseudoscientific methods are used. None really have logical explanation but, if the story is told well, it doesn’t matter.

Although there is overlap between the two sub-genres, there are also distinctions. In an alternative history, there is a point of deviation from our accepted timeline, often referred to as the jonbar hinge, an event in the past altered the direction history took. It could be the other side winning the American Civil War as in Ward Moore’s ‘Bring The Jubilee’.

Stephen King’s ‘11/22/63’ explores alternative outcomes of trying to prevent the assassination of President Kennedy. Here, the key is the change in history due to an action or inaction. The parallel world system postulates an infinite number of alternatives which may or may not have a common branching point. It is often suggested that each decision we make causes a different thread in the pattern. An alternative world scenario usually only has the one alternative, the parallel world has multiples.

Stories based on the former tend not to a means of crossing between the two while the premise of the latter is the passage between them. Paul McAuley’s novel ‘Cowboy Angels’ uses the device of action in parallel worlds to great effect. The big problem of this kind of scenario is finding a method of accessing them. 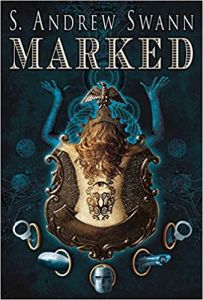 In ‘Marked’, S. Andrew Swann combines both alternative histories and parallel worlds but uses the magic traditional in urban fantasy to access them. His first person narrator, Dana Rohan, is a detective with a high clear-up rate. What she hasn’t told colleagues is that she has what appears to be a tattoo covering her back. Using this Mark she is able to cross into parallel worlds which do not have her in it but are effectively the same. In these places, she can observe the crime happening. As this stands, this ability could have made for an interesting crime series but Swann goes further with it.

For Dana, her life drastically changes direction when, while on patrol with her partner Jacob, a stranger is murdered with a sword. Before he dies, he tries to communicate with Dana in what she thinks is a foreign language. Suddenly, she finds herself out of her depth. She decides it is time to go through the papers her father left her before he was killed and discovers aspects about her early life that she hadn’t been told. She also finds out that she is being hunted.

The Mark enables Dana to travel to parallel worlds but, as she discovers, there are alternative histories out there as well. The reality she has become used to isn’t as stable as she first thought. Many fantasy novels have a hidden heir who’s identity is obscured because of the usurpers that want to kill them but, at some point, all must be revealed. Unfortunately, this novel doesn’t deviate from that scenario. Of more interest is the alternative history that involved Napoleon’s dynasty conquering the known world.

Dana isn’t the feisty, don’t step over my lines kind of heroine, at least at the start of the novel. She is a damaged person and has been all her life. She doesn’t remember anything before her adopted father found her, a six year-old feral child. She admits to being secretive and not having friends, not the attributes needed to be a cop.

Despite her father having been one, she doesn’t appear to be the kind of person who would be admitted to the force and, with the medicals and physical training needed, it would be almost impossible to keep the Mark hidden. For a role Swann has written for her, she seems a very unlikely candidate. While it is a change from the usual run of female cops out to prove themselves all the time, Dana’s character swings too much the wrong way and it takes a lot of suspension of disbelief to see her in this role.

The unusual mixture of fantasy and familiar tropes create an interest that should carry the reader beyond the issues with characterisation. While no explanation is attempted as to how the Mark changes the realities and pushes the bearer between worlds in this situation it has to be regarded as magic. The pace of the action picks up a quarter of the way in and from there, the action blurs the edges of the mesh of realities. There will be many who will enjoy the quirky situation and the action sequences as long as they don’t look too closely underneath. 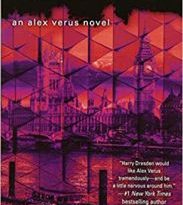