It looks like Amazon Studios is really pulling out all the stops these days. First they snag the rights to a little known intellectual property called Warhammer 40,000 (you may have heard of it), and then they go and cast none other than Henry Cavill as the star AND executive producer of the franchise. Whoa, talk about a power move.

Yes, Amazon has said that it has reached a deal with Games Workshop to acquire the intellectual property rights to the world of the wildly popular tabletop miniature wargame “Warhammer 40,000.” Amazon will now be able to provide movies, TV shows, and other IP-based content on its Amazon Prime streaming services thanks to the partnership.

For those unfamiliar with Warhammer 40,000, it’s a tabletop game set in a far-off future where humanity is on the brink of either great success or utter destruction. There are all sorts of threats to humanity’s empire, including traitorous humans driven by their own ambition, alien empires determined to reclaim the stars, and malevolent gods corrupting reality. Sounds like a real barrel of laughs, huh?

But seriously, the Warhammer universe has been captivating fans of all ages, from all walks of life, for nearly 40 years. It’s grown through miniatures, tabletop games, animations, novels, licensed material, and video games, so it’s no surprise that Amazon Studios would want to get in on the action. And with Henry Cavill on board, it’s sure to be a hit.

Cavill, known for his roles in Man of Steel and Mission: Impossible – Fallout, is no stranger to the world of Warhammer 40,000. In fact, he’s been a fan since he was a boy, making this a truly special moment for him. He’s excited to bring the franchise to life and work with Vertigo Entertainment, Games Workshop, and Amazon Studios on creating a truly immersive experience for fans.

“Warhammer 40,000 has captured the imagination of fans of all ages, from all walks of life, and all over the world,” said Jennifer Salke, head of Amazon and MGM Studios. “We are excited to work with Henry, Vertigo Entertainment, and Games Workshop across our Amazon entertainment businesses on this brilliant, immersive franchise for our global customers to experience for years to come.”

“I have loved Warhammer since I was a boy, making this moment truly special for me. The opportunity to shepherd this cinematic universe from its inception is quite the honour and the responsibility,” said Henry Cavill. “I couldn’t be more grateful for all the hard work put in by Vertigo, Amazon and Games Workshop to make this happen. One step closer to making a nigh-on lifelong dream come true.”

“It’s great news and we’re absolutely thrilled; we’re working with a fantastic triumvirate in Henry, Vertigo, and Amazon. Henry’s well-known love of Warhammer 40,000—and his passion as a world-builder and storyteller—will serve us all well in the coming years. Finally, Warhammer will make it to the screen as the fans have hoped, and as they deserve. Exciting times!” added Andy Smillie, creative director of GAW.

So get ready, Warhammer 40,000 fans. It looks like your favorite universe is finally making its way to the screen, and with Henry Cavill at the helm, it’s sure to be a wild ride. And for those of us who have never played the game, well, it’s never too late to start. Who knows, maybe we’ll all become die-hard fans just like Cavill. 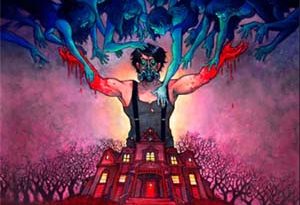 Amazon jets into the comic-book business.