Throughout the years Walt Disney’s classic fairy tale ‘Sleeping Beauty’ has garnered much consideration in its countless variations of big screen storytelling over the generations since its 1959 debut as an animated film. In the lavish family-friendly fable ‘Maleficent’, audiences are treated to a different spin on the dream-like Disney diva and her bedtime innocence, the showcasing of ‘Sleeping Beauty’s villainous vixen regarded as ‘the Mistress of All Evil’. Sure, highlighting the one-time angelic fairy turned wicked-minded sorceress is an interesting concept meant to instill some inventive intrigue into a familiar children’s story. However, despite ‘Maleficent’s visual opulence and the A-list presence of Oscar-winner Angelina Jolie as the curvaceous and infamous force behind the cursed pillow-hugging platitudes of Princess Aurora this live-action fantasy just does not live up to its flamboyant whimsy. ‘Maleficent’ is ambitious in its escapist skin and will no doubt capture the imagination of the kiddies that will indulge in the excesses of its glossy, adventurous execution. Still, this sweeping saga regarding the notion that one of the cinema’s most dastardly females is ‘a woman scorned’ never really takes advantage of the majestic opportunities in a narrative too shoddy and sedate to convey any genuine kind of devilish decadence. As eye candy cinema, ‘Maleficent’ has its share of moments in decorative frivolity. Nevertheless, there is a sense of padded puffiness in the wondrous CGI-enhanced fairy tale spectacle that undermines the transparent story devoid of any distinctive freshness in the ‘Sleeping Beauty’ mythology.

Director Robert Stomberg, making his first directorial debut with ‘Maleficent’, dips into his film-making forte for those that are quite acquainted with the movie-maker’s impressive work in the arena of delectable film special effects. With noted magical flourishes in such gems as Oscar-winning efforts involving ‘Avatar’ and ‘Alice In Wonderland’ (not to mention 2013’s ‘Oz The Great And Powerful’) it should be no mystery as to why ‘Maleficent’ looks and feels so exuberant in its vibrancy. The visual artistry is undoubtedly scrumptious and Stomberg does aptly create a mystical and menacing world where dense jungles, an assortment of colorful odd-like creatures and even the exotic enhancement of Jolie’s black leather-clad treacherous tart is an eye-popping experience to behold. The posh aesthetics certainly do not disappoint in ‘Maleficent’.

Screenwriter Linda Woolverton’s choppy script weaves in and out leaving the narration fluttering in the wind. When the constant reminders of appetising art direction, costume, makeup and challenging cinematography steps in for a lackluster story that is mainly build on Jolie’s impish performance that is impulsively sketchy at best then ‘Maleficent’ is in danger of partaking in its own slumbering state of mind.

The backstory tells of Maleficent’s good-nature and overall spirited disposition as a youthful fairy in the land of the Moors where various species, mainly fairies and humans in particular, try to co-exist in a scenic landscape filled with picturesque promise. Clearly, Maleficent loves the surrounding nature elements and even has an on-going camaraderie with mundane-looking tree-like monsters. Maleficent soon finds her affections growing for a human peasant named Stefan. Of course, Maleficent is clueless about Stefan’s long-term goals as he has a constant taste for power and prestige. Perhaps Stefan’s sinister plans may have stirred up the future cynicism in an optimistic Maleficent? Stay tuned…

After years gone by, we finally are introduced to the older versions of one-time infatuated lovebirds Maleficent (Jolie) and Stefan (Sharlto Copley). Sadly, Stefan’s connection with Maleficent has considerably mellowed out because his focus remained on the big prize at stake, the royal affiliation in the human world’s king’s court. Stefan wants to realise his ultimate dream to becoming king one day but his expectation cannot come fully into fruition. You see Stefan must eradicate the troublesome Maleficent upon His Majesty’s orders and only then can Stefan claim the throne in finally capturing his life-long achievement of being a prominent ruler. So the conniving Stefan works to destroy the pesky Maleficent but does not do a thorough job in putting the venomous she-devil out of commission as he merely disables a power of hers. For Maleficent, her chance to get back at Stefan, now named the successor to the out-going king, will be something of suitable revenge that will haunt her former opportunistic suitor.

When Stefan and his princess-wife give birth to a baby girl named Aurora (yes folks…the soon-to-be Sleeping Beauty), this allows Maleficent some measure of retaliation when she curses the child with an eternal sleeping spell. Soon, the film morphs into a guessing game as a growing Aurora (Elle Fanning) must survive the first sixteen years of her life under the watchful guidance of three fairies in the guise of human form in Flittle, Thistletwit and Knotgrass (Leslie Manville, Juno Temple and Imelda Staunton) to ensure King Stefan’s offspring’s safety from the wrath of the seething Maleficent.

The confusion in ‘Maleficent’ persists because the theme of the film wanders in aimless directions and one is left wondering what the motivation for Maleficent’s purpose is at large? On one hand, the intent is to show off how sultry and sadistic Jolie’s flashy femme fatale can be within the realm of the notorious Sleeping Beauty antagonist’s warped reputation. Jolie has some seedy fun playing the sexy siren with a dash of despicable naughtiness for good measure. But then, somehow the film wants to coat Maleficent’s dirty deeds with sympathetic strokes that interfere with the scary aspects of this warped woman’s psyche. Why water down the intended gimmick of Maleficent’s maliciousness in favor of a ‘he done her wrong’ vibe found in a conventional Lifetime channel TV movie? There is nothing wrong with referring to the underlying female empowerment message about a wayward woman’s inner demons being triggered by male manipulation. In fact, this is not a bad psychological push in a kinetic kiddie caper about vengeance between gender politics. Unfortunately, this looming sentiment feels rather awkward and misplaced in ‘Maleficent’.

The supporting players in ‘Maleficent’ are serviceable for what it is worth but get overshadowed by the spry festivities. Fanning’s Aurora could have used a little more wide-eyed enthusiasm as the inflicted tyke with doomed drowsiness. Copley’s Stefan lays it on thick at times as the conceited Crowned One. The trio of fairies that oversees a vulnerable Aurora could have had more spark and spunk by Temple, Staunton and Manville.

The giddiness and overall excitable presentation of Stromberg’s rollicking vehicle does echo the Disney-esque whirlwind of wonderment. In keeping with the tradition of ‘Sleeping Beauty’s aforementioned ‘the Mistress of All Evil’ nickname ‘Maleficent’ should be more than just a Hollywood-style middle-aged mean girl with a copycat Norma Desmond-like disposition drowning in amusement park-inspired theatrics. 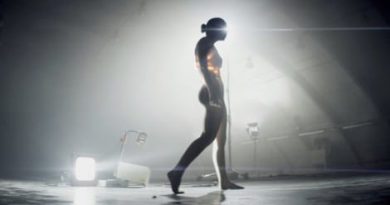