Over the years of reading ‘Alter Ego’, I have seen the odd piece about Manuel ‘Mac’ Raboy’s comicbook work and especially a superb painted head rendition of Captain Marvel, Jr., which is also here so getting Roger Hill’s book, ‘Mac Raboy: Master Of The Comics’ should fill in all the gaps. As he reveals in the introduction, Raboy was also a pretty private person and only a couple photos exists showing what he looked like. He preferred to let his work speak for him and there’s a lot of it.

Apart from illustrating Captain Marvel, Jr., Bulletman and a host of Fawcett comicbook characters, he was elected to replace Alex Raymond on drawing the ‘Flash Gordon’ Sunday newspaper strip where he stayed for 18 years. Raboy was also good at woodcut engraving and using scratchboard. He was born in 1914 and died of cancer in 1967 at the age of 53, far too young. He was also meticulous and would erase a day’s work if it didn’t work. Consequently, like many comicbook artists, he needed assistants to help and keep to deadlines and even re-used earlier work when necessary. 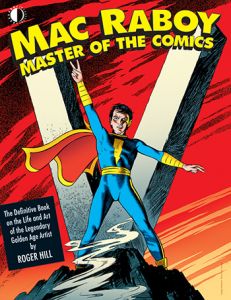 The interview with background artist Bob Rogers/Rubin Zubofsky gives not only insight into his time working was Raboy but also with working at Fawcett and for a brief time on the ‘Flash Gordon’ Sunday strip. The fact that he worked with him again on ‘Flash Gordon’ showed how good a working relationship they had until they broke up after an argument.

Seeing how much these artists were paid per page back then might seem small compared to what they are paid today but in non-inflation days, it really was a lot of money in America.

Something that did answer a question was why most comicbook artists weren’t bothered by not having bi-lines on their material was because they thought working in comicbooks was a lowly occupation and a reason for embarrassment and that they would graduate to more ‘professional’ better paying work. That should make you wonder what they would think of how comicbook work and how creators are seen today. Raboy was proud of being associated with the creation Captain Marvel, Jr. but detested doing ‘Flash Gordon’ and just saw it as his daily job.

Seeing the sample pages here of Captain Marvel, Jr., a couple are still a little contradictory, subject to writer, but if he does accidentally say ‘Captain Marvel, even as part of saying his own codename, he will get the bolt of lightning. He also seems to think he’s two different people on page 77. There are Fawcett’s guidelines as to what should be in their comicbooks as well giving some insight into the 1950s.

An interview with Gene McDonald, another of Raboy’s background artists, say he was also responsible for a lot of the Photostats of early Captain Marvel, Jr. and gives another perspective. Equally, so does comicbook artist Mark Swayze who designed and drew Mary Marvel. An interesting pieces of info here reveals Raboy was left-handed and was away for a few months with an illness but still submitted work.

Lest you think that’s all in this book, he also drew the 8 issue ‘Green Lama’ comicbook and other things behind. There’s a good selection of his commercial work which shows how good an artist he really was. He even did a coloured version on the cover of Green Lama on # 7.

Finally, at the end, we have Roger Hill’s interview with Mac’s son, David, who made a name for himself as a zoo director redesigning several American zoos. His dad even kept his work away from his children but their later mother, Lulu, archived a lot of it. Even so, this will be the only place to fill the gaps.

As you should tell, I found this book a fascinating read and gave some insight into the life of a professional illustrator doing what he saw as a day-to-day job than a need to like what he did. Even more so as to the nature of keeping ahead of the deadlines when you draw really slow and admired for his art. It does make me wonder had Raboy been more out-going would he have moved properly into commercial art but then we all live up to our own vocations. 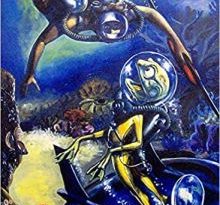 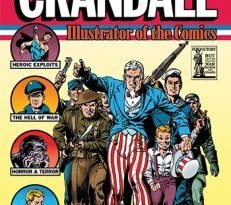