‘Lute’ by Jennifer Thorne is a folk horror tale set in the near future on the fictional island of Lute in the Bristol Channel, England. The first-person narrator is Lady Nina Treadway who met the handsome Lord Treadway on a cruise almost seven years ago. They fell in love, married and now have two children, Charlie, aged six, and Emma, aged three.

They live in a big old mansion called Alder House and Lord Treadway takes the care of Lute island and the local people seriously. Nina still feels a bit of an outcast because all the families have been there for two thousand years. Not only that, but she’s an American and there is a world war on in which the USA and Russia are attacking Europe, which is why Alder House has only one housekeeper instead of the usual staff and most of the young men have gone away to fight. Still, all is generally well except that the Day is looming. 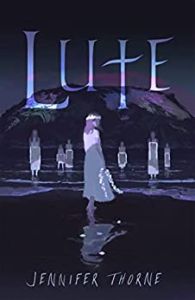 Lute, according to legend, is blessed by ancient Celtic gods. The weather is pleasant and the population are healthy and prosperous. Wars seem to leave the island unscathed and even when people leave, the gods look after them. Lute does seem particularly blessed in many ways but couldn’t that just be location, climate anomalies and plain good luck? No.

Unfortunately, the gods want payment for this gift at the rate of one life per year, the toll to be exacted on the day of the summer solstice once every seven years. On the Day, seven people will die. Always. There is no escaping fate and the islanders accept it. This year, they have sent all the children away for the Day to the nearby isle of Sunnan for a camping trip. Presumably, the gods are okay with this.

Despite hints about the Day over the past six years, Lady Nina Treadway didn’t really take it seriously. But when her husband’s plan to escape to the mainland is scuppered by an inexplicable engine failure, she’s alarmed by how scared he seems. Son Charlie didn’t help by disappearing when they were due to leave, running away to the ancient grove of trees where druids once practised their art. So, the Treadways are stuck and must await the Day. Nina spends the time on her usual routine, looking after the kids and visiting her friend, Jo, who runs the tea shop, pondering her troubled past in America. However, there is no escaping the mounting tension on the island.

It’s well done. The minor problems of social life in a small community, Nina’s struggle to fit in and be liked, gives you a solid insight into her character. By showing us decent people in the first hundred pages, the author makes you worry about who will die. A mother herself, she effectively communicates the real gut-level fear parents have of anything happening to their children. Lady Treadway is full of self-doubt thanks to her own dear old mum but knows she has to be strong now and it is ‘now’ because the novel is written in the present tense, which is not usually my favourite technique but it works here.

At 288 pages, ‘Lute’ is a reasonable length. There’s a tendency for novels to get bigger and bigger which the author has resisted. It’s not non-stop action because the first part is getting to know the characters and building suspense for the Day, but there’s no padding. She tells the story in lucid prose and ends it without dragging it out. Hurray for that. ‘Lute’ gripped me early and didn’t let go. Definitely recommended.