‘The Whispering Skull’ is the second novel in Jonathan Stroud’s ‘Lockwood & Co.’ series. The plot is situated in an indistinct time (some hints in the books seem to indicate an alternate present, but the overall feeling of the period is still quite Victorian) in England – London, to be exact. For more than fifty years the country has been affected by the Problem: a terrifying epidemic of ghosts plagues England. The danger is far greater than just being scared to death, as even the slightest touch of some ghosts can be enough to kill a living being. So a number of specialist psychic investigation agencies have emerged to destroy or contain the dangerous apparitions. Because extreme psychic sensibility is almost exclusively found in young children, the agencies employ them to battle the threat of the so-called visitors. The usual arrangement is an adult handler and some child agents who can hear, see or smell ghosts.

The novel starts with the case of the Wimbledon Wraiths when Kipps and his team of Fittes agents swoop in and steal the thunder of Lockwood, Lucy and George. In a fit of anger, Lockwood challenges his rival to a contest: When they next compete on a job, the losing team has to admit defeat publicly in The Times. Opportunity knocks soon after in form of a case. Lockwood & Co. are hired to secure and guard the grave of a sinister Victorian doctor. Things go awry and not only is a terrifying phantom unleashed but a dangerous relic is stolen from the coffin. DEPRAC gets involved and Lockwood & Co. and Kipps and his team are tasked with procuring the relic before it can be used to wreak havoc in London.

The skull which George keeps in a ghost-jar to experiment upon stirs again. It seems to be deeply involved with this case and provides us with some more clues about the extraordinary talent of Lucy who can actually hear it. Add to that auctions, glittering dinner parties, dangerous and dirty relic-men, forays into the dark underworld of the relic trade and a conspiracy in the highest echelons of one of the most renowned agencies and you have got an inkling of what happens in the sequel to ‘The Screaming Staircase’.

Jonathan Stroud’s ‘The Whispering Skull’ has once more crafted a young adult steampunk mystery ghost novel which is well-written and a real treat to read. The second novel is as smart, funny, witty and genuinely frightening in all the right places as was the first one. The three protagonists become more defined and complement each other really well through their different strengths and weaknesses. I look forward to reading about their next adventure. A definite must for fans of ‘Ghostbusters’ or Jonathan Stroud’s previous novels. 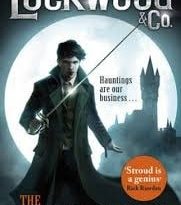