Catching up with this year’s volume of ‘Safehold’ books, David Weber’s tomes are still tied up with technological advancement and a fight between the free countries and the Church aligned countries, ignoring, for the most part, the plight that left mankind on this planet in the first place to avoid conquering aliens who would detect advanced technology being used. To say that’s the entire plot for the series is…well…actually true. There’s an android, Merlin Althrawes, orchestrating the changes and the little hints that he wants to do it all in a generation often makes me think he knows more than he’s letting on. These battle between Charisia and its associated countries and the Church is beginning to feel a little one-sided. Not only is Merlin providing them with innovations without the necessary experimentation, he now has the leaders of the Church bugged so knows their plans way in advance. You would think Merlin or Weber would have thought of something more ingenious to get things sorted out.

This time, Weber reminds the readers that part of the extermination of the priests is because their Inquisition is as bad as the one we had on our world and they are essentially committed war crimes.

Probably the biggest change is that Merlin Althrawes is finding himself over-extended and using the data of a back-up version of himself creates Nimue Alban, a feasty female to act as a royal bodyguard. Merlin’s original persona was female so this is hardly surprising and adds a new player to the field.

After seven books of ‘Safehold’, the main thing that tends to reaffirm Weber’s style is that everything about it is densely written and there is little change when it comes to dialogue. The peasants, for want of a better work, sound a little coarser but just as well educated as the geniuses that are floated around from time to time. This style also swamps emotional content too much and even when someone is killed it isn’t allowed to sink in, let alone be concerned in how it affects things.

The lists at the back of the book are still extensive and I do wonder if anyone really reads up on the minor characters. It would be helpful if tombstone icons were added to point out which ones don’t survive to keep track or only leave the survivors from book to book. Granted, Weber is trying to make these books look epic and things aren’t centred around the key cast but so much of it could be covered in a few words and moved on. Showing every last detail is making these stories into watching grass grow. One of my team says this is typical of Weber’s other book series but well and truly, things are stagnating and need some life pumped into it. Maybe that is why Nimue Alban is here. 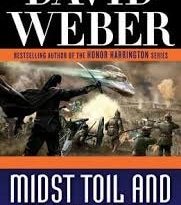