An American science unit called Monarch has a Resource Exploration Team, led by Bill Randa (actor John Goodman) and Houston Brooks (actor Corey Hawkins) they get permission to investigate an uncharted island associated with legends going back to Truman’s period after its discovery by spy satellite in the early 1970s. They have to get there before the Russians satellite discovers it. They gather a tracker James Conrad (actor Tom Hiddleston), camera-girl Mason Weaver (actress Brie Larson) and a military helicopter team lead by Lieutenant Colonel Preston Packard (actor Samuel l. Jackson) ordered by the President and take a piggyback with another ship going that way.

Using seismic charges, they discover the main island is hollow. It also upsets a particularly large inhabitant and he’s not happy. It trashes all the military helicopters and very few people are left. Kong isn’t the only giant creature There’s also a giant octopus, spider and reptiles. The latter is the most dangerous although not a reptile we’ve seen before called Skullcrawlers as they only have two legs and a tail balancing a large hungry head on a neck. The scientific team are separated from the military for a time and meet up with a silent tribe an American, Captain Frank Marlow (actor John C. Reilly), marooned there since 1944. They eventually meet up with the Packard’s military unit who convinces Conrad that they have to collect one last person as they never leave anyone of their team who is alive. However, at the graveyard of Kong’s parents, they find out his head and are attacked by the giant reptiles. They win at a price but Packard still wants to go on to get more weapons to attack Kong.

In the meantime, Conrad and Waver meet Kong rather close up and with Marlow return to rescue the giant ape, realising the significance of keeping him alive as if that would stop him, For that, the rest of the film is yours and don’t forget to watch beyond the credits.

It seems odd that Weaver doesn’t have a telephoto lens for her camera. I know this is set in the 1970s, but it did exist. One of the extras pointed out it was used for real in the film, so it’s a shame that the photos weren’t used in the credits.

Unless Kong doesn’t wander very far, you would expect to see more damage from where he walks. I mean, it certainly shows up with Kong goes on the rampage. At least we get some idea of his idea and it isn’t fruit and nuts.

The military seems to have a lot of ammunition. There are elements of ‘Predator’s military unit in all of this which is hardly surprising when you consider this has strong elements of a military movie. Interestingly, director Jordan Vogt-Roberts in the audio commentary points out more connections to ‘Apocalypse Now’ (1979) as being the biggest influence, even though all the choppers are destroyed in their first attack.

There are elements of the 1933 ‘King Kong’ film as well as ‘The Lost World’ (1960), which is hardly surprising. The extras said they removed the ‘beauty and the beast’ aspect from all the other Kong films and then promptly have Weaver rescued by Kong. It’s also odd that his vision is good enough to see her so well on the palm of his hand. It’s indicated that Kong is 100ft tall. Putting yourself in his paws and you would be the size of a gnat to be brushed off. It isn’t like he hasn’t swallowed humans before in the film.

Kong’s build and posture is more man-like than gorilla which is a shame as when you take into account the Square-Cube Law, would at least have supported his weight better. It isn’t as though gorillas can’t stand on two legs from time to time. From the extras, they say they wanted Kong more man-like but forget that in Willis O’Brien’s day, few people had an opportunity to really study gorillas or resolve other animation issues.

I agree with them about the Vietnam settings that were used for much of the Skull Island setting. I suspect they will be used a lot more in other films.

The various extras add a lot of texture to the films. I think a couple of the deleted scenes could have been included in the film and one would certainly have reinforced Packard’s view of never leaving anyone behind. Then again, with a statement like that, you know that record is going to be broken. Likewise, the clip about the size of computers back then would also have been a reminder that it was in the 1970s.

The audio commentary with director Jordan Vogt-Roberts clues in how many people were involved in creating each scene and effect. In many respects, I wish more than one person as involved because a little more banter would have added some variety to the talking.

I’m still uneasy as seeing a gorilla-like creature being so huge and able to move. The Skull Island, not to mention the subsidiary islands certainly allow a large enough ecology for a while. If all these large animals were affected by some sort of mutant-inducing gas for growth then you do have to wonder why the human tribe there hasn’t grown. They couldn’t all have stayed in that territory for so long without wanting to look outside occasionally.

Purely as a science fantasy film, then I’m sure it will keep its own franchise and keep everything consistent for that. 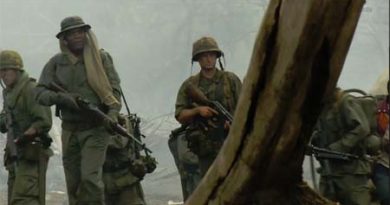 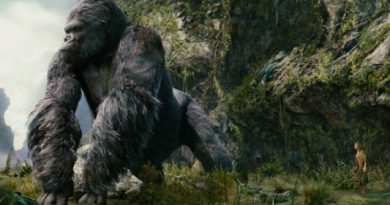