Author Jerry Pournelle’s children have now told us that their famous father passed away yesterday, aged 84. He’d only just made his – now sadly last – appearance at DragonCon where he was in fine form as always.

Jerry pioneered the military SF sub genre. Hell, he almost invented it. Several of his novels were set in his CoDominion universe and focused on his fictional mercenary infantry force known as Falkenberg’s Legion.

In 1985, Jerry’s alien invasion novel Footfall reached the number one spot on the New York Times Best Seller List. Another bestseller, Lucifer’s Hammer (1977), reached number two. Both novels were co-written with his friend Larry Niven. They also did the fantastic SF tale The Mote in God’s Eye together.

In 1994, Pournelle’s friendly relationship with Newt Gingrich led to Gingrich securing a government job for Pournelle’s son, Richard. At the time, Pournelle and Gingrich were reported to be collaborating on a science fiction political thriller.

Fantasy author Raymond E Feist noted of Jerry’s passing, “He was a HERO. He commanded an artillery battery and covered the retreat of thousands of US soldiers and Marines through “Frozen Chosin” during the Korean War, suffering a hearing loss as a result. He loved his nation, his family, his friends, and even people he disagreed with all the time. He could make me want to spit nails, but I knew he had a good heart.”

Goodbye, Jerry, you’ll be missed. You can leave your condolences and memories of Jerry on a special online page set up by his family at https://www.jerrypournelle.com/chaosmanor/well-wishing/ 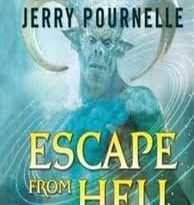