Of all the Jack Kirby magazines I have had the privilege to see, number 85 (Winter 2023) has to be the most striking cover to date. It’s a high gloss, full page picture of the Thing from the Fantastic Four sat on a stool quietly reading a newspaper while the villain Red Skull lights the fuse to a bomb positioned under the stool. Its printed on clear vinyl with some patches left clear which allows the 2nd page to show through. 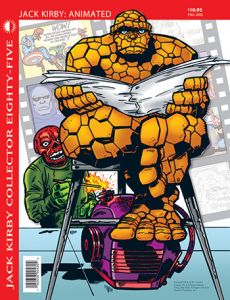 On the vinyl page a small red banner runs along the left and across the top but behind the Thing’s head. While the left banner includes the text ‘Jack Kirby Collector Eighty-Five’, the top banner has ‘Jack Kirby: Animated’ (more on that later) plus the cover price of $10.95 and ‘Winter 2023’. The only thing spoiling the cover is the vertical barcode in the bottom left corner. Apart from that, this is a cover that will look good framed and up on a wall.

Anyway, for those who haven’t heard of the ‘Jack Kirby Collector’, it is a magazine published quarterly that celebrates the life and work of Jack Kirby. He was a was a prolific comicbook illustrator who’s work spans a period from 1935 to the 1990s. Although he died in 1994, his legacy lives on to the present day not only in his published work but in the many artists who were inspired by it.

Let’s start the review. This issue is edited as ever by John Morrow whose introductory editorial piece, ‘Opening Shot’ is subtitled ‘It Started With A Sailor’. Morrow explains that this issue has been put together to highlight Kirby’s little known animation work and the broader influence he had on animation. I must admit that I had no idea he was involved in animation, so this was all news to me.

This issue follows the usual format and contains interviews, articles and even the first part of A Flying Fool piece titled ‘The Face In The Storm’, which was originally published in ‘Airboy Comics’ in November 1947. The concluding part to this tale is in the next edition of the ‘Jack Kirby Collector’. Having read the first part, I think the next edition would be worth getting just to conclude the story.

There are lots of examples of Kirby’s drawings, usually just one or a few panels from his published works. In this issue, though, there are drawings which were never published and, in some cases, they were never meant to be. The best example of that is the storyboard drawings for the final episode of the cartoon series ‘The New Fantastic Four’. There are 3 full pages of these which are fittingly fantastic.

The interviews are worth reading as they give a fascinating look into Kirby’s life and the commercial environment he operated in. There are some little nuggets of information such as Kirby’s relationship with Joe Ruby, the co-creator of Scooby Doo. Another person points out that Kirby’s cops were frozen in time. always looking like a 1930s beat cop regardless of the setting or era of the story. Now that I think about it, I’m sure he’s correct.

The interview with Mark Evanier conducted by Jon B. Cooke in 1996 is especially interesting. Evainer was probably the man who got Kirby involved in animation. This was in the late 1970s so Kirby was about 60 years old. It’s a gentle reminder that he remained extremely productive throughout his life. I have said before that these interview provide a wonderful insight into the social and commercial environment in the USA at the time and this one doesn’t disappoint. Hanna-Barbera swapped the ‘Fantastic Four’ with ‘Godzilla’ with another studio, DePatie-Freleng. The reasons for the swap are intriguing. Marvel Studios had a hand in it but I shouldn’t overlook the Kirby connection. He was employed by Hanna-Barbara at the time but ended up working for both of them. Another example of just how productive he was.

While the focus of this edition is on Kirby’s animation there is still space for some other features. One such is the Incidental Iconography piece by Sean Kleefeld or so I thought. Kleefeld analyses how Kirby drew specific things over a period of time. In this piece, he’s looking at the uniform of the Fantastic Four characters. While the Fantastic Four were big in comics they also had their own cartoon series. Kirby was involved in the first two incarnations of the cartoon series so there is an animation element to Kleefeld’s article.

There are 79 pages of Kirby related information in this issue with an additional 3 pages of advertisements at the end. Also to be found towards the back of the issue is the readers letters section. If you wanted proof of Kirby’s influence then the letters from Australia and Italy alongside the letters from the US should provide more than enough.

Some of the letters correct or contradict statements from the previous edition. That got me thinking as some of the people involved have now died so we may never know the full facts. The ‘Jack Kirby Collector’ moving more and more into historical research. Perhaps it always was.

Anyway, the ‘Jack Kirby Collector 85’ is another edition of top quality. It’s packed with lots of information on Kirby’s foray into animation which wasn’t limited to just the storyboard drawings. Did you know he even drew some of the large-scale merchandising props? The icing on the cake though has to be the cover. Its wonderfully produced and just shouts ‘JACK KIRBY!’

I know I said this on my last review of the ‘Jack Kirby Collector’ but I found it fascinating and well worth the cover price. Given editor John Morrow’s track record, I bet I’m going to be saying the same about the next issue. 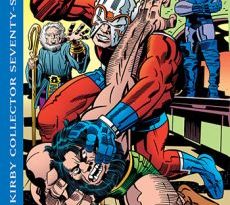 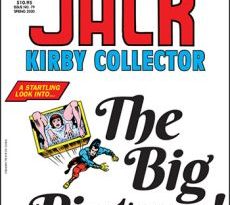 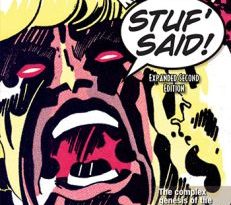