Easily the best thing in this issue of ‘Jack Kirby Collector’ is ‘The Four-Colour War’ by Christopher Irving, an in-depth article that wouldn’t be out of place in a quality newspaper’s Sunday magazine if they covered this genre. It’s a survey of the effect of World War II on the American comicbook industry, including Kirby, but to be honest he isn’t the focus. There is also a study of patriotic heroes. In January 1940, predating Captain America, MLJ Comics launched ‘The Shield’. The first super-hero ever to wear a flag, he was given his missions by J. Edgar Hoover, the first FBI Chief ever to wear a skirt. Other patriotic heroes came after Captain America, including Yankee and Doodle, the Star-Spangled Kid and Stripsey, Miss Victory and Minute Man.

The article provides an excellent summary of World War II and has one great quote. ‘The amount of American civic belief in the government and the nation may seem far-fetched by today’s standards but when one considers the government’s salvaging of the economy and job market after the great depression, it is not surprising.’ Nowadays in America, you have to say how terrible government is before you run for office to take charge of it. Oh well.

I keep hesitating over buying the ‘Marvel Essential Rawhide Kid’ because I’m not sure how much Kirby there is in it. I’m more inclined to the purchase now after reading ‘Marvel’s Kid Cowboys’ by Will Murray and ‘Rawhide Kid, Bantamweight Scrapper’ in this issue’s ‘Kirby Kinetics’ contribution from Norris Burroughs. Both show sample pages of art I would like to own. We think of Kirby as a super-hero artist but he covered all the bases. Also, during this period in the early 60s, he was doing smaller panels and drawing real things. There’s a solid competence to it that I like.

‘The Great Kirby Kontroversy Letters’ by Shane Foley is a statistical analysis of the letters to Marvel’s Kirby comics of the 1970s to see if they were as unfavourable as is sometimes supposed. There were rumours that some of the staff had it in for Jack and that editors deliberately published the anti-Kirby letters. In general, Foley finds that this is not so. Neither Marv Wolfman, editor-in-chief from January to September 1976 nor Archie Goodwin, who succeeded him, weighted the columns in favour of the negative.

‘Mad About The Madbomb’ is another look at Kirby’s second Marvel Age and author Gary Picariello was an enthusiast for the story. It wasn’t brilliant but it wasn’t bad. Picariello thinks the complaints about it drove Kirby to do shorter stories thereafter, usually no more than three issues per tale. I was always surprised he put Kissinger in a heroic light, especially as Jack reputedly hated Richard Nixon.

‘Incidental Iconography’ by Sean Kleefeld is a short study of Ben Grimm’s development from a lumpy Thing to a chiselled rocky Thing. He reckons Jack was giving him that now familiar chiselled appearance earlier than you might think but Dick Ayers stuck with the softer look. On the same spread, ‘Ink Fight’ by Richard Kolkman is a table showing who inked the most Kirby pages over the years and the winner is…Joe Simon. If you ask me, it’s a shame Frank Giacoia, Syd Shores and Bill Everett didn’t ink him more often but what’s done is done.

There are two articles on Kirby and the Summer of Love, one of which is by me. The only thing I’ll say about it is this: if you’re a Kirby fan and tempted to write an article for the magazine, no pay but a complimentary copy, do it. The transformation from the dull text on your screen to the full colour illustrated copy in the magazine is bloody marvellous. I was absolutely delighted by the look of the final product.

The other article about Love’s Summer is ‘What Were They Smoking?’ by David Penalosa. It turns out that Stan and Jack weren’t smoking or injecting anything but there’s no doubt that Kirby’s exciting, colourful visuals chimed with the psychedelic movement of the time, as did Stan’s irreverent scripts. It was interesting to read these more serious, considered reflections on almost exactly the same comics that I reviewed with cheerful mockery.

The magazine closes with ‘Jack F.A.Q.s’ which is a transcript of a convention with Mark Evanier and Steve Sherman answering questions about Kirby from the audience. There’s one of these every issue. They sure get around.

Sometimes, not often, the magazine veers too far in the direction of unfettered adulation for Kirby, not to mention crediting him with the creation of the entire universe. Usually, it gives a more considered view. This is a good issue of ‘Jack Kirby Collector’. 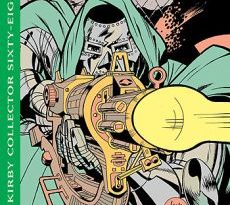 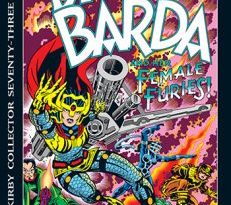