Kami are the spirits of Japanese folklore and an inukami, in particular, a dog-spirit that features in this manga series is called Yoko, a supposedly untrainable and rebellious spirit, despite her essentially benevolent nature. Keita Kawahira is a young man from a family of spirit trainers but, in time-honoured manga tradition, he’s really an idler, more concerned with having a good time than anything else. 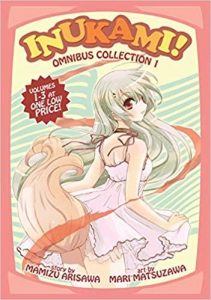 Both effectively outsiders so far as family traditions go, ‘Inukami! Omnibus Collection 1’ covers their introduction and their first few steps in understanding one another. Their dynamic takes a little getting used to the ‘correct’ approach being one where the male spirit master, Keita, dominates the female spirit through force of will. Keita very quickly sees Yoko as a sex object, though in the manga’ s defence, Yoko isn’t having any of this and humiliates Keita at almost every turn.

It’s a neat inversion, playing on the ‘fan service’ conventions of the genre while developing Yoko’s character. She’s perfectly aware of her status, but has no interest in being bound by it, underlining her rebellious nature in a way that comes across as sympathetic and justifiable. At the same time, Keita isn’t a complete jerk and, through the course of the five stories in the volume, there are hints that he and Yoko are developing a genuine affection for one another.

Indeed, the underlying conceit of the book is that humans and spirits co-exist uneasily. It’s only through working together than Keita and Yoko can deal with any evil or lost spirits haunting human homes and businesses. For this to work, they need a real partnership and only understanding one another can they do their jobs effectively. Despite the raunchy humour and saucy imagery, the manga is actually quite sweet. Keita and Yoko wants to be loved but know nothing about how human relationships actually work, albeit for different reasons.

Besides the five stories, there’s a variety of supplemental material included in the volume. A comic-strip from artist Mari Matsuzawa tells how she came to adapt the stories, while a short essay by Mamizu Arisawa outlines his concerns that a woman might have been offended by his risqué humour. There’s also a bit about Japanese honourifics, used liberally in the manga.

‘Inukami!’ is, in its way, a sort of humour romance and combining such elements with supernatural action-adventures and broad comedy is a winning formula in Japanese manga. If there’s nothing here that’ s revolutionary in its originality, what it does, it does well. Pitched at older teens and whether you’ re a human or a spirit, there are useful lessons to be learned about how adult relationships work.