I’ve always found film novelisations reveal more about the intent of the scriptwriter and director than the final film. To get any novelisation written to schedule, it has to be written while filming is carried out and so there has to be some presumption over what the characters are thinking, which is rarely seen in films as it is, and their actions. As such, a lot of the time, the author might not always go too in-depth in that that respect, letting the film do most of the work and the reader’s mind fill in the gaps as they read the book later with the visuals firmly in their minds. With reviewing, we tend to read the novelisation before seeing the film and although I do have the Making Of to review as well, it made a lot more sense not to get any preconceived ideas in my head by not looking at it first. Having just started that book as this goes on-line, I think it might have helped a little. In many ways, ‘Interstellar’ is more about a film explaining relativity than wormholes. If you travel vast distances, even through wormholes, then relative ages change significantly for the people you left behind and the voyagers. The first third of this novelisation of the film by Greg Keyes establishes Cooper as a family man and farmer who also used to be as astronaut. When his daughter, Murphy, discovers things are moving of their own accord in her room and Cooper finely believes her and that gravity is affected. Presumably this must have happened to other households but he’s the only one who sees the significance.

Cooper goes to investigate, only to find himself co-opted to join a team to travel through a stable wormhole out beyond Saturn. He is, of course, an ex-NASA test pilot and not even aware that he was needed but after twelve explorer spaceships have been lost, they are short of pilots and with the Earth falling apart, need a new world for the human race to survive on. No pressure then. Interestingly, even in this book, no one seems to have spotted that this is actually the thirteenth mission so presumably that superstition doesn’t exist in the near future.

Much of the journey is in hibernation and has certain shades of ‘2001’ about it. We’ll leave aside the fact the other missions sent have failed and no one really knows what’s at the other end, although saying it’s in another galaxy without displaying evidence seems a bit weird. I mean, how would they know where without some space charts being able to find the Milky Way and establishing how far they have travelled?

Switching to scientist mode, the somewhat near instantaneous travel through a wormhole means the now-time here is the same now-time at the other end. The only reason that it looks differently is because when you look out into the night sky at either end, the time it takes light to reach across the cosmos, means several millennia would have passed. If you’re switching between galaxies, then this is multiplied up by several factors of 10. Relatively speaking, people at either end should still be aging at the same rate.

However, where relatively then comes into play is that Cooper and his team have to travel at near light speeds to the various nearby planets to see what happened to the other explorers and see if they can find that desperately needed habitable planet and so less time passes for them than back home. Along with this, they also get the occasional messages from home that they read every time they wake up and how everyone, including Cooper’s own family are getting older. Much older.

As there’s big spoiler as to what happened on one of these planets, I better not go too far into the plot-line, although the action there interspersed with what was going on back on Earth tends to make the story a bit choppy. Whether this is resolved in the film version, you’ll have to decide for yourselves, especially as pictures might be carrying more detail.

Without wishing to give away too much about the plot, outside of the SF elements, the main drift is something that would still apply in non-genre, although that far from Earth and not knowing if there would be a follow-up mission to see what happened looks a little…shall we say…far-fetched. The biggest impression I got from the novelisation is the SF aspect looks like window-dressing than used to govern what happens in the story. 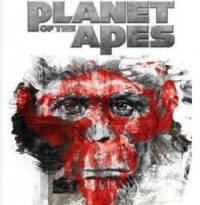 Dawn Of The Planet Of The Apes: Firestorm by Greg Keyes.

Dawn Of The Planet Of The Apes: Firestorm by Greg Keyes.