For those who don’t know, a little black book is your contact list, although I doubt if any of those in Harley Quinn’s really want to be there. I should point out such books don’t necessarily come in black and small depends on how you mean big.

Amanda Conner and Jimmy Palmiotti only take writers and cover credits in this 6-part series but the artists here have definitely took notes from their book with cartoony expressive faces, including Neal Adams, and looked like they had a ball doing it. The contrast with the likes of Wonder Woman, Green Lantern, Zantanna, Superman and Lobo clearly gets balanced as they get caught in her madness. 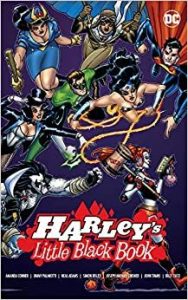 The oddest story has Harley, in a future story, with a ball stolen from Superman’s Fortress of Solitude that, when activated, flips her into an alternative reality and in world war 2 where she is part of a team with Batwoman and Big Barda to rescue a military officer in Austria.

Any homages to ‘Where Eagles Dare’ are deliberate. None of which is helped when she discovers she’s already there and considered a spy. I’m only pointing this one out because it’s a jump away from the usual formula of getting Harley linked to a super-hero for some action as in the earlier stories in the volume.

I should point out this mini-series originally came out in 2016-17 and imagine my delight to see Neal Adams had drawn and inked an issue. This time, using the same aliens who got Superman and Mohammed Ali decades ago to fight to see who would fight their champion.

This time they have Superman versus Harley Quin first. This really is Adams at his best and the Man of Steel is still a lousy boxer. A beautiful follow-up to the original and you do have to wonder why or when it doesn’t have a Treasury-size release at some point to compliment it.

Still using one of Superman’s power balls, Harley finds herself off-planet and facing a prison of mean aliens, including Lobo. When she accidentally lets them loose, Lobo lets her come with him until they crash land on another planet and have to make do.

The art is by Simon Bisley but whether its him or the colourist, its too dark. Not the script but the art. Harley works more effectively in lighter colours and it isn’t as though Lobo hasn’t been painted (sic) in similar tones.

If you want a book to brighten your week end of December, this one is worth pursuing and there’s a bet that there’s something for everyone here.