I reviewed volume one of the music from ‘Green Lantern: The Animated Series’ last year.  As then, I like such music even when I haven’t seen the series because I can treat is as its own entity rather than having to think what part of the series it relates to. Composer Frederick Widemann succeeds in making this such a blend that each of the thirty-seven tracks, the majority about two minutes each, blends together and makes it seem more like a symphony than a mish-mash. This is always a good sign for background music that you can enjoy for its own sake although when he changed the tempo I noticed my own typing speed went up. After track 20, there is the occasional gap between tracks but I suspect that is because they varied more and you can feel the difference.

The CD comes with a twelve page booklet with assorted images from the series and comments from composer Freddie Wiedmann, producer Giancardo Volpe concerned about your teeth and scriptwriter Jim Krieg.

Even if you weren’t aware of the ‘Green Lantern: The Animated Series’, this album makes up a nice selection of mood music that is pleasant to the ear and makes an interesting addition to any collection. 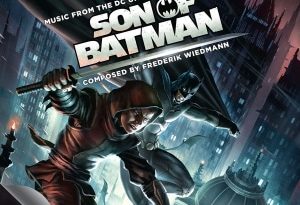