The world of zombie horror films lost arguably its greatest ever proponent in July 2017 when producer/director George A. Romero died of lung cancer at the age of seventy-seven. Later that year Fantasm Media, a new publishing company created by people who used to work on the famous horror mag ‘Fangoria’, published a magazine, planned before Romero’s death, which focuses on his legacy.

They have subsequently published two more magazines in this series, focusing respectively on horror actress Linnea Quigley (August 2018) and on Romero’s first zombie film, ‘Night of the Living Dead’ (1968). I’ll review the other two mags over the coming months, but here I’m looking at the first one, ‘Fantasm Presents # 1: George A. Romero – The Official Magazine’. There are twenty items here, including two editorials, seven essays, nine interviews, a photo gallery and a report from the public memorial service for Romero. 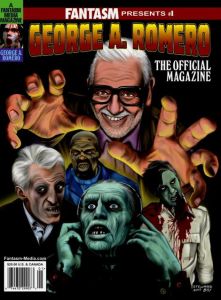 Both of the co-editors, Chris Alexander and Brian Steward, introduce the issue with their personal recollections of first encountering Romero’s films as teenagers and how these early experiences led them to become professional horror film journalists and eventually enabled each of them to meet and become friends with Romero. It is clear from these editorials that this magazine a truly a labour of love for them both.

Six of the essays discuss each of Romero’s ‘Dead’ films in turn. Brian Steward opens the proceedings by noting just how revolutionary ‘Night Of The Living Dead’ (1968) was, from the opening scenes in the cemetery, through the choice of black actor, Duane Jones, to play the leading role and right on to the deliberately downbeat ending. Chris Alexander sees its sequel, ‘Dawn Of The Dead’ (1978) as the film from which the modern zombie horror movie is descended.

He cites the nihilistic subtext that came from setting the film around a shopping mall and the extraordinary make-up, special effects and haunting music. Ultimately, though, he sees the main reason for the film’s success as being due to Romero’s emotional engagement with his subject matter, bringing a sense of sadness and loss to the scenario, the main characters and even the zombies themselves. Brian Steward considers how Romero’s original trilogy closed with the angry and claustrophobic ‘Day Of The Dead’ (1985), a film constrained by budget restrictions and in which the director reflected on the cold war paranoia of the early 80s.

Fast forward two decades and we get to ‘Land Of The Dead’ (2005). The essay here comes from super-fan Lee Karr, who was lucky enough to play a zombie extra in a critical scene in the film, when the zombies attack Fiddler’s Green. Karr provides fascinating insights into what it’s like to take part in the filming of a zombie film as an outsider. It’s clear that he loved the experience. Next, Justin Beahm discusses the subtext of ‘Diary Of The Dead’ (2007), which uses the found footage format to make points about post-9/11 fear of the other and the dangers of 24/7 news.

Finally, Trevor Parker takes on the widespread criticism of Romero’s sixth and last zombie outing, ‘Survival Of The Dead’ (2009), asserting that the film takes the continual evolution of Romero’s zombies to its natural conclusion, where they become self-aware to some limited extent and are able to be fed with animal, rather than human flesh. Parker suggests that had Romero lived longer, this might have enabled him to extend the franchise further, exploring many social and political issues through the lens of semi-intelligent, non-cannibalistic zombies who would presumably be domesticated and exploited by the surviving humans, for example as a cheap workforce. Unfortunately, of course, that’s no longer a possibility, more’s the pity.

The interviews are with a wide selection of cast and crew from Romero’s ‘Dead’ series. They start with John Russo, co-writer of ‘Night Of The Living Dead’. While stressing his continued good relationship with Romero, he is at pains to explain how he, not Romero, was the one to come up with the idea of flesh-eating zombies. Next up is Scott Reiniger, a softly-spoken classically-trained actor, who brought all his theatrical skills to bear on the role of reckless cop Roger in ‘Dawn Of The Dead’.

It’s clear from this interview that although horror is a small part of his repertoire, he is extremely proud of his part in Romero’s legacy. Jim Krut featured in a short but well-loved scene in ‘Dawn Of The Dead’, when the top of his zombie character’s head was chopped off by a whirling helicopter blade. In his interview, ‘the Helicopter Zombie’ as he’s become known, discusses how he got the role, what it was like to work with special effects guru Tom Savini for the shot and how this small part of his acting career has had such a positive effect on his life.

Next comes special effects supremo Greg Nicotero, these days known as one of the main forces behind AMC’s ‘The Walking Dead’. He talks about how he got interested in special effects, how seeing ‘Dawn Of The Dead’ persuaded him to focus on horror rather than SF, his initial preference, and how he got his big break assisting Tom Savini with the effects for ‘Day Of The Dead’. After that, Terry Alexander talks about his role as the loner John in ‘Day Of The Dead’ and John Amplas discusses the work he did over many years with Romero, both in front of and behind the camera, including a brief cameo as Fisher in ‘Day Of The Dead’.

The next two interviews concern characters centrally related to Amplas’ cameo. Gary Klar played Private Steele in ‘Day Of The Dead’, working for the selfish leader with a Napoleon complex, Rhodes, played by Joe Pilato. It is Rhodes’ cold-blooded murder of Amplas’ character Fisher that shows his true colours and ultimately turns Steele and his colleagues against him. Both interviews provide further detail of the challenges the actors and crew faced in filming ‘Day Of The Dead’ in an underground set and on a limited budget. The final interview is with John Harrison, who worked with Romero for years in many different roles. He’s probably best known for composing and performing the score of ‘Day Of The Dead’, along with that of several other Romero productions. What comes across most clearly from Harrison is how much he enjoyed working with Romero and what a lovely man he was to be friends with.

There’s also a couple of features that aren’t essays or interviews. These are a photo gallery, displaying six behind the scenes photos from the filming of ‘Dawn Of The Dead’ and a fan’s report from the public memorial service organised by Romero’s family in Toronto just a week after his death. Both provide additional colour to the rest of the material.

The final piece in the magazine is a recollection of ‘My Friend George’ by Romero’s long-time producing partner, Peter Grunwald. This short piece crystallised for me what had come across in so many of the other interviews. Romero was a highly intelligent, gifted and thoughtful filmmaker but these abilities were allied to a humble, generous and friendly nature. These personal characteristics are what made him not only a great person to collaborate with professionally but also a tremendous friend.

The only thing about this magazine that I didn’t enjoy were the production values, which echo many of the less user-friendly aspects of the classic horror magazines of the past. In particular, the text appears in three column format on each page, often in a white and relatively small font on a black background. It may just be me getting old but I always find this more difficult and tiring to read than black text on a white or coloured background, preferably in single or double column format and a larger font. However, it does instantly identify the magazine with those of the past, which is presumably the effect that the publishers were looking for.

I imagine that super-fans of George A. Romero’s work may already know many of the facts and anecdotes recounted in this magazine. For the rest of us, though, this is a wonderful collection of personal accounts of what it was like to work with Romero, allied to a useful critique of his six ‘Dead’ movies. If you like zombie films but don’t know Romero’s series as well as you ought to, read this magazine first, then go out and get the films on DVD. You won’t regret it.