NASA’s Transiting Exoplanet Survey Satellite (aka TESS) is undergoing final preparations in Florida for its April 16th 2018 launch to find undiscovered worlds around nearby stars, providing targets where future studies will assess their capacity to harbour life.

“One of the biggest questions in exoplanet exploration is: If an astronomer finds a planet in a star’s habitable zone, will it be interesting from a biologist’s point of view?” said George Ricker, TESS principal investigator at the Massachusetts Institute of Technology (MIT) Kavli Institute for Astrophysics and Space Research in Cambridge, which is leading the mission. “We expect TESS will discover a number of planets whose atmospheric compositions, which hold potential clues to the presence of life, could be precisely measured by future observers.”

On March 15th 2018, the spacecraft passed a review that confirmed it was ready for launch. For final launch preparations, the spacecraft will be fuelled and encapsulated within the payload fairing of its SpaceX Falcon 9 rocket.

TESS will launch from Space Launch Complex 40 at Cape Canaveral Air Force Station in Florida. With the help of a gravitational assist from the Moon, the spacecraft will settle into a 13.7-day orbit around Earth. Sixty days after launch, and following tests of its instruments, the satellite will begin its initial two-year mission.

Four wide-field cameras will give TESS a field-of-view that covers 85 percent of our entire sky. Within this vast visual perspective, the sky has been divided into 26 sectors that TESS will observe one by one. The first year of observations will map the 13 sectors encompassing the southern sky, and the second year will map the 13 sectors of the northern sky.

The spacecraft will be looking for a phenomenon known as a transit, where a planet passes in front of its star, causing a periodic and regular dip in the star’s brightness. NASA’s Kepler spacecraft used the same method to spot more than 2,600 confirmed exoplanets, most of them orbiting faint stars 300 to 3,000 light-years away

“We learned from Kepler that there are more planets than stars in our sky, and now TESS will open our eyes to the variety of planets around some of the closest stars,” said Paul Hertz, Astrophysics Division director at NASA Headquarters. “TESS will cast a wider net than ever before for enigmatic worlds whose properties can be probed by NASA’s upcoming James Webb Space Telescope and other missions.”

TESS will concentrate on stars less than 300 light-years away and 30 to 100 times brighter than Kepler’s targets. The brightness of these target stars will allow researchers to use spectroscopy, the study of the absorption and emission of light, to determine a planet’s mass, density and atmospheric composition. Water, and other key molecules, in its atmosphere can give us hints about a planets’ capacity to harbor life.

“TESS is opening a door for a whole new kind of study,” said Stephen Rinehart, TESS project scientist at NASA’s Goddard Space Flight Center in Greenbelt, Maryland, which manages the mission. “We’re going to be able study individual planets and start talking about the differences between planets. The targets TESS finds are going to be fantastic subjects for research for decades to come. It’s the beginning of a new era of exoplanet research.”

Through the TESS Guest Investigator Program, the worldwide scientific community will be able to participate in investigations outside of TESS’s core mission, enhancing and maximizing the science return from the mission in areas ranging from exoplanet characterization to stellar astrophysics and solar system science.

“I don’t think we know everything TESS is going to accomplish,” Rinehart said. “To me, the most exciting part of any mission is the unexpected result, the one that nobody saw coming.” 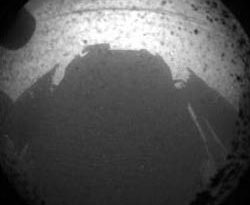 Curiosity mission as Spielberg would have done it.