Author Sabine Hossenfelder warns from the start that if you have any sort of faith that her book ‘Existential Physics: A Scientist’s Guide To Life’s Biggest Questions’ might not be for you. She also goes very deep, exploring the creation of the universe and might not necessarily be solely about the Big Bang and some of the other theories, even throwing in some that might contemplate some god-like being, before quickly proving that and the age of the Earth has some undisputed truth.

Hossenfelder also explores the problems of descriptive words that have the right descriptions but  normally used in other aspects of science. If ever there was an argument of the limitations of language then this will make you think. It does present a problem of describing scientific concepts and how they become scientific laws looking at the results and then how they get there and what happens next. Don’t treat this book as a light read although Hossenfelder does put her case in a pleasant way but you do need to have a think about what she says and have a general contemplation at the end of each chapter. We are dealing with the universe here after all. She also draws upon SF, even if it is principally Asimov, for the odd example. 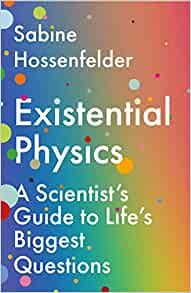 If you can want to become acquainted with some basic up-to-date physics lore that will make you think then this book should be on your read list. Certainly, if you’re writing SF, this has to be on your reading list.

Hossenfelder’s examination of quantum mechanics should make you think, especially how even photons in the double-slit experiment can be in two places at the same time. This experiment always comes up in this subject, mostly because its so easily repeated but no real understanding of what is going on. I mean, does the photon decide it wants to go back and do the other slit or is something else going on? She also examines the acts of free will and how much truly is. You’re not going to get out of her chapter with a greater grasp of quantum mechanics but you’ll certainly have plenty to think about.

I would question her on whether we are in a digital reality as she is mostly making the assumption that the computers running it would be similar to our own. It would make more sense to have something akin to the quantum computers we are still working on but in multi-processor mode. We certainly haven’t got that far and it would still be questionable as to who programmed it in the first place.

Over the years, where constants were used in science equations, I’ve tend to see them as a little bit of a fudge, all right, a constant fudge, because it makes nature works. Hossenfelder points out there are 26 constants which was quite a revelation although I do wonder why no one has actually done more thought into quite what they are. If there is a deity then when you see the number of decimal points in constants, then it can’t be very good at mathematics.

Although she doesn’t call it as such, the universe is a Goldilocks version or we wouldn’t exist. With the number of galaxies out there, not to mention the number of potentially habitable planets, I would think that there must be a high percentage of planets that would never make the cut or at least a long time before they are. When you consider the number of false starts we had on Earth before the direct line that led to us, then its bound to happen elsewhere as well.

The look at the act of free will in organics and in Artificial Intelligence and where the two will meet should also be dear to our hearts. Although giving an AI independence has a long way to go, its interesting how many name people in the computer business clearly don’t want it. One can only hope such AIs can be controlled by a power switch and trapdoors that can be used to shut them down. Its an old SF trope to have renegade computer and robot AIs but it would be remiss not to mention it.

She interviews scientists Tim Palmer, David Deutsch, Roger Penrose and Zeeya Merali for their viewpoints so you get a rounded area of conversation as well.

There is a lot in this book to contemplate. Although Hossenfelder poses a lot of questions, don’t expect all the answers here. As you might have noticed above, I use the term ‘think’ a lot. Well, that’s what you will do with this book. If it also means you get some story ideas out of the contemplation, then its money well spent. If you want to know a bit more about how the universe ticks, then this should work for you as well.