British actor Emilia Clarke, aka Daenerys Targaryen and Mother of Dragons in the Game of Thrones TV series, has been speaking about how close she came to death from a horrible pair of brain aneurysms which required three emergency brain surgeries by the NHS in the UK to save her life.

The first aneurysm struck Emilia while she was working out at the gym in London and just after she had finished her role on the first season of Game of Thrones.

“I immediately felt as though an elastic band were squeezing my brain,” she said. “Somehow, almost crawling, I made it to the locker room. I reached the toilet, sank to my knees, and proceeded to be violently, voluminously ill. To keep my memory alive, I tried to recall some lines from Game of Thrones.”

After she was rushed into the nearest hospital’s emergency room, it was discovered she’d had a stroke caused by bleeding in the brain, followed by a brain aneurysm through an arterial rupture.

This was – it was thought at the time – successfully dealt with by emergency surgery, but then, while shooting the second season of Game of Thrones, it was discovered Emilia had a second brain growth which could explode and kill her at any second – so she then had to endure a further two rounds of brain surgery (the second operation hadn’t been aggressive enough, and she needed a third attempt).

Thankfully, all the NHS operations were a success and she is – obviously – fine and hale today.

A close save, indeed. And luckily for us, she’s back in the final series of GOT, as well as putting in an appearance as Qi’ra in Solo: A Star Wars Story.

Emilia’s now a Charity Ambassador for the Royal College of Nursing in the UK, too! 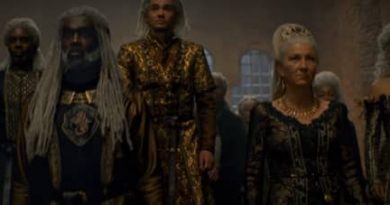 Game of Thrones final season, like, ever (eight) (trailer).

Game of Thrones: Why Hodor says Hodor (a lot).

Game of Thrones: Why Hodor says Hodor (a lot).