‘Embers Of War’ is book one in the ‘Ember Of War’ series by Gareth L Powell.

Trouble Dog is a warship. Well, she was a warship but she turned her back on her past and has become a saviour ship instead. Now she travels space at the command of the House Of Reclamation, trying to find and rescue ships and their passengers that are in trouble. She does this along with her crew of random humans and non-humans, all of whom have their histories and have found a family with this ship. Trouble Dog and her crew are called to help a ship that has gone missing in a dodgy area of space and that’s when things start to get interesting. This is not their usual rescue mission, this could turn out to be the beginning of the next big war. 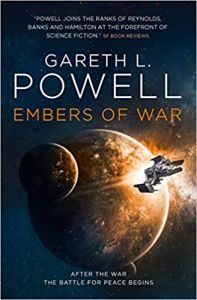 I have to admit I’m really not a big reader of traditional Science Fiction books but I’m really starting to get into this new wave of books that are set in space so technically Science Fiction but that actually focus more heavily on the people involved rather than the science. I hate to say that one thing is like another but this book is somewhat like ‘Firefly’, which is a series I absolutely loved. But when you look at the bare bones of this book, it really does have those feelings.

I mean there’s a found family ragtag crew on a ship (OK, this one is sentient so that’s different) who are trying to get along after they’ve all been slightly broken by a war. But this book is so much more than that and I completely loved it! Another comparison (again, I hate doing this) is to Becky Chambers, this is like her books but somewhat more grown up, if that makes sense.

Throughout this book, we get multiple points of view from the ship, the captain, and different crew members all of which adds to the story. I didn’t find that any one voice was more interesting than the others, I just wanted more and more from all of them. Some of the voices were more humorous than others, but they all had something special about them. For example, Trouble Dog was trying to wrestle with her past and the violent feelings that had been programmed into her.

Trouble Dog had a great personality, I think that’s one of the things I love in Science Fiction, to have an AI with a great personality. I also really enjoyed how the crew all interacted with each other as they are all so broken, they all have their own pasts and they all need to make allowances for each other. This was beautifully written by Powell.

I found that this book was beautifully plotted and we were given just enough at each chapter to make us want to read more to find out what exactly was going on. I defy you to guess exactly where this book is going when you start to read it, you will not guess correctly. Even if you do, you will still want to read it if only for those characters. I enjoyed the fact that even though this book appears to be going the way of all Science Fiction and fantasy books, i.e. towards a massive battle where the goodies fight against the baddies and lots of people end up dead. No, this book does not do that, you’ll have to read it to find out what really happens but I for one enjoyed this difference. The ethics in this book just feel so different from so many other Science Fiction and fantasy books and I really enjoyed that.

The world-building was great, too, even though we only really saw a very small section of this world. There are some very interesting elements to do with the politics and how the sentient beings in this Universe all work together or not, as the case may be. With this ending of this book in mind, I’m interested to see how this universe starts to change in book two in the series.

Overall I loved this book (I might have said that before) and I will be diving into book two in the series as soon as I get my hands on it.

One thought on “Embers Of War (book 1) by Gareth L Powell (book review).”