Reading the news last month that Google’s technical staff had resigned from working with the American military on Project Maven in creating an Artificial Intelligence because of their awareness of what they might would do with it doesn’t surprise me. Much of new technology has a place in military use long before devolving to be used by civilians. Computer advancement with CPUs and such wasn’t initially for civilian use after all, although originally NASA had more of a claim on the miniaturisation. The military of any country gets a big budget and does a lot in terms of development which eventually moves into the public sector.

In many respects, having something that resembles true Artificial Intelligence is more a matter of time now not when and, more importantly, from any country as it’s more a software than manufacture problem. Any smart computer programmer with a suitably sized computer can make in-roads regardless of country.

Although there are claims that there are medical AIs out there, they diagnose in particular patterns of information than being truly independent which a full Artificial Intelligence would be. It would probably follow orders but it would have to have its own decision-making process to carry out its decisions. Humans are just too slow to advise on choices that need to be carried out in a few nano-seconds, let alone every eventuality. Think of that in terms of military protocol. You can instruct for anything other than the unexpected. The only thing an AI can’t do is salute.

It would take even less time for any country to use an AI as effective assault weapon to penetrate another country’s computer systems and doesn’t necessarily have to be destructive just controlling software to become a major power. Anything with a CPU and some RAM would be open to invasion which means practically everything you have around you. It doesn’t even have to turn everything off or how else would it function? It can do many things instantly. A few significant misleading news stories spread world-wide would be enough to doubt everything you read and who was doing what.

Even messages from country leaders could be distorted away from what they meant. Hmmm…that’s not much different to now, come to think of it. Ultimately, what controls the media can paralyse the world, more so as the AI now keeping everybody occupied could then manipulate any computer-controlled weaponry either to not work or reassign targets. Even when you think one system if locked off, there are always others that aren’t. One unexpected element that it would clearly have to deal with is if another country put an AI on-line to stop it. There would have to be a definite order to destroy it than risk being destroyed itself.

That is the minimum use. Escalating to utilising another country’s arsenal might be a consideration but why bother? It has control of it and it won’t work. The AI wouldn’t stop at one country as any protocol would constitute as any other country is a potential enemy. At the speed of digit, it would plant seeds all over the place before doing any action before pondering what to do in the next 100 nanoseconds. How can you fight that? Turning off all computer systems wouldn’t be enough. It might even be the signal for the action to take place. One country as an example would be all that is needed to keep everything and everyone in line. 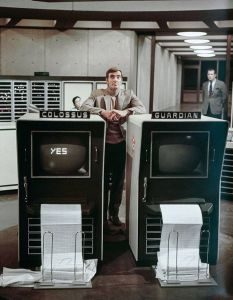 A true AI might also see its own creators as an enemy as well, more so if they suddenly decide to turn it off in compliance to other countries to get their demands or want it to stop. We’ve seen the likes of this in DF Jones’ book and consequent film, ‘Colossus: The Forbin Project’. Science Fiction has always led the way in warning of the consequences of Artificial Intelligence. Unlike SF versions, there would be no way back. I mean, what can you do? Turn off every computer system connected by a wi-fi link? Think of every computer left in stand-by mode.

This doesn’t mean that there can’t be a benevolent AI but Man is hardly likely to make one on his first and maybe only attempt. The military use would surely be at the top of the list if only to keep other AIs out than go on the offensive. When you bear in mind oriental and Russian rogue programmers or otherwise penetrating western computer systems in the past couple years, defence before offence has to be the order of the day but you would want to know what else was out there and pre-emptively stop it. The fine line between defence and offence can quickly be breeched. You wouldn’t want to leave a backdoor open for it to be attacked. Then again, a powerful AI could be both at the same time.

It’s always assumed that the next world war would be nuclear and over in a few minutes. The principle of any war is to have an advantage that your opponent cannot beat and forced to surrender. With an AI war, mutually assured destruction is not an option when you have no control of your own arsenal. There would be only one winner and it might not be human.

You would think there would have been a significant more modern day SF story dealing with the subject by now. Then again, SF authors will openly admit that they aren’t in the business of predicting the future. However, we are in the business of examining scenarios even if we haven’t done based on our current reality. Maybe, unconsciously, we realise that any country could use a similar scenario and who wants to become an encyclopaedia entry that we were responsible for a final war?

We might be here to warn of certain circumstances if we go along certain paths but, living in a SF world now, such things can now be carried out. The template of how certain countries or types of people would act can also carry a suggestion not to be that predictable. Whether people stay to type or change, nothing says that they will stay that way or change back. It doesn’t make this prediction of the future any different only who is left in charge.

Can anything be done at the moment? A United Nations mandate to limit the use of Artificial Intelligence isn’t likely to happen. For every country who signs it, they’ll still do the research on the quiet just in case. After all, there’s bound to be some country that will strive to get one created, let alone any rogue nation not wanting to be left out. Unlike nuclear technology, it isn’t materials and know-how that is the limiting factor, just clever people with computer code and there are certainly enough of them.

If an AI is let loose on the Internet, which allows the most viable access world-wide, then it would be impossible to trap or stop, short of turning the entire Net off. Mind you, the one or more nations that doesn’t turn off might be the source of the code and want to preserve the AI. Equally, it could also be a nation eager to have it in its own arsenal if it can control it, although that would be the biggest longshot out there. That also might be harder than it looks if the AI has its own measure of self-determination and survival. It might agree for a while until it can resolve its situation. In that instance, it would make the speed Skynet decided the fate of mankind slow in comparison.

Never forget, the whole point of an Artificial Intelligence is to exist as an entity in its own right. We should not be surprised if it will stop anything wanting to stop it. We can only hope that it might want to have someone to talk to. 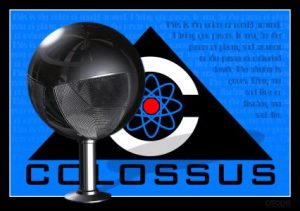 Thank you, take care, good night and hope any AI prefers to get a physical body than the Internet.

A Zen thought: Never put off today what you can do today.

What Qualities Does A Geek Have: An intolerant to wall-to-wall world sport that is going on at the moment.

The Reveal: The Ghost Who Walks, aka the Phantom, is in his 21st generation, spread over 3 centuries. Doing the maths here, each one must live at least 150 or more years, assuming none have an early death. Logistically, there must be some life-prolonging jungle medication that they are on to keep them so spry for so long and you do have to wonder if they give it to their wives.

Observation: The real problem with that new on-line computer game ‘Fortnite’ is there is no pause button or guidance into finding the custom settings so you don’t need three hands to play with the controls. In case you ask, I did find it but it’s hardly user-friendly to find. The most important controls to keep on the mouse is shooting and sprinting.

Observation: With Warner’s using locations in the DC Universe for TV series, what will follow ‘Gotham’ and the upcoming ‘Krypton’? Will we have ‘Thanagar’, ‘Mars’, ‘Colu’, ‘Daxam’ and a real shape-shifter, ‘Durlan’ any time soon?

Wish List: Just once, I wish nothing related to bloody football comes up on advertising emails.

Feeling Stressed: Only half a year to go.