The forgettable 1995 film ‘Judge Dredd’ (or as a majority of film critics and fans deemed it Judge Dread-ful) starring Sylvester Stallone was a flat and disjointed sci-fi spectacle that got a tepid treatment from the clueless handlers in Hollywood. Cheapened and hokey, ‘Judge Dredd’ was barely a footnote at the box office some seventeen years ago. However, the British cult comic gets a brand new spanking facelift in the millennium with this ambitious souped-up remake ‘Dredd 3D’ that is considered more faithful to the material and colorfully exciting than the mid-90’s dud of yesteryear.

Karl Urban plays the helmet-headed futuristic law enforcer with an implanted grudge. Surprisingly, ‘Dredd 3D’ ‘is solid in its presentation of tongue-in-cheek action, visual spryness and an impish dosage of charged thrills. This bombastic B-movie was not expected to be that effective in portraying John Wagner’s post-apocalyptic law-abiding peacemaker. Although slightly derivative, ‘Dredd 3D’ does contain some genuine and imaginative spark that is in stark comparison to its cornball predecessor. Thankfully, ‘Dredd 3D’ maintains its grim and graphic aura so identifiable with the surrealistic and gritty comics.

For those not so familiar with the movie’s premise or character’s backstory, the motorcycle boot-wearing Dredd is a ruthless judge based in the seedy confines of a metropolis known as Mega-City One. Dredd’s mission is clear cut as he wants to ambitiously clean up the mean streets of Mega-City One with any means necessary. Dredd is solemn and tactical as he approaches his cases methodically.

As much as Dredd wants to attack the riff raff with determined aplomb in his raucous region, he must endure the handcuffed circumstances at hand. First, he is saddled with a rookie sidekick named Cassandra Anderson (Olivia Thirlby) that threatens to slow down his progress in protecting society from opportunistic cretins. Secondly, Dredd must investigate the horrific incident at the Peach Trees towering housing apartment complex.

Interestingly, Peach Trees is run by the psychotic drug dealer Ma-Ma (Lena Headey). One would not necessarily label Peach Trees as the ideal venue for rest and relaxation. In fact, it is swamped by some of the most despicable dregs and lowlife personalities known to the community. Anyhow, Ma-Ma’s latest drug that she is peddling, Slo-Mo, is deceptively potent and puts the user in a prolonged state of agony as death lingers longer than expected.

The treacherous Ma-Ma, a former prostitute with a deadly checkered past, is aided by one of her chief lieutenants named Kay (Wood Harris). When Kay is captured by Dredd and Cassandra and taken into custody, all bets are off. Ma-Ma turns her towering building structure into a deathtrap for Dredd and Cassandra. The high-wire results are rather conclusive as the determined Dredd feasts on mowing down the mischievous morons randomly until he gets to the madwoman Ma-Ma. Armed with instinctive fury, Dredd obviously has a score to settle with the mind-bending Ma-Ma and her wretched reign on the vulnerable masses.

Ma-Ma’s sinister henchmen (along with coerced residents and crooked judges) are ordered to bring her Dredd’s wanted head on a silver platter. The stakes are raised even higher when poor Cassandra is captured and execution awaits her unless Dredd can complete his slaughterhouse mission to seize control of the wicked and warped Ma-Ma’s ominous hysteria.

Inevitably, ‘Dredd 3D’ will bring up reminiscences of the Indonesian film ‘The Raid’ which was released earlier this year. The theme was uncannily similar in that a resilient police officer (although unorthodox) had an unconventional approach for administering justice. Undoubtedly, ‘The Raid’ was more skillful and crafty in its execution than the heavy-handed exuberance of ‘Dredd 3D’s visual grimy trickery. The resourceful editing cuts are impressive and stylish as the slow motion flourishes gives the film’s drug-taking sequences a twisted and trippy joyride into scattered mayhem.

Nevertheless, ‘Dredd 3D’ will probably satisfy the ardent fanboys looking for the similar patterns that echo the graphic utopia of the sardonic comic books. Enriching in its gory gumption of bouncing bullets and bloody confrontations, director Pete Travis and screenwriter Alex Garland  basically follow the by-the-numbers explosiveness that hits convincingly more so than it misses. As a standby contrast to Stallone’s nostalgic ‘Judge Dredd’ take this hyperactive 3D edition is more stimulating and relentlessly involving.

As the stoic trigger-happy Dredd, Urban is strangely stiff and does not invite any intriguing or distinctive presence amid the eye-popping sleaziness. His deadpan catchphrases feel forced and mechanically wooden. Urban hardly matches the campy intensity of his gun-running character’s isolated and offbeat shoot ‘em up mentality. Deranged drug dame Ma-Ma is given a notable spicy turn by Headey as her villainous vamp is reasonably effective in disdain and creepiness. Thirlby’s serviceable turn as Dredd’s partner-in-crime easily runs circles around comic Rob Schneider’s feeble hanger-on from the original fleeting flick.

Overall, ‘Dredd 3D’ is a passable improvement as a showy sci-fi showcase drenched in off-the-cuff grungy absurdity. Surely Dredd enthusiasts will delightfully welcome this R’obocop’ knockoff to be their desired judge, jury and executioner. 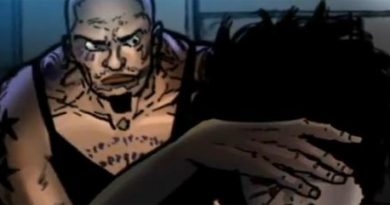