As the new season of Game of Thrones approaches, office stationery suppliers Viking Direct has ramped up the anticipation in their office by creating a giant dragon sculpture for their staff.

The beast, constructed from the equivalent of 1,200 sheets of A4 paper, was set up as a surprise for employees before employees came into work.

When staff arrived, they were confronted by the 12.95-metre-long dragon, with a body width of 2.8 metres, and wingspan measuring in at 6 metres. The installation was completed by a jet of ‘fire’ spouting from the dragon’s mouth.

Viking bosses worked with artist, Andy Singleton, to create the oversized sculpture. The entire dragon is made from carefully planned, cut, and scored paper, with a minimal wooden support to give it height. The dragon took 100 studio hours to design and create. A further 10 hours were then needed to install the creation in the Viking office.

The idea for the dragon sculpture was inspired by Game of Thrones, but the individual style and look of the creature were designed by the artist.

Andy Singleton said of the design “I wanted the dragon to be an expression of my approach and style of work, so I did not look at any other reference images while making it, apart from my drawings. I wanted parts of the dragon’s armour to look like faceted minerals, but also to have softer elements almost like fur on the underside. The colour choices just felt right when I was selecting the specialist paper”.

The design was originally sketched, before being made into a small-scale model. Once details were ironed out, the creation of the full-size sculpture began. The final piece was created in sections, starting with the head, to allow easy transport to its final home.

Once it’s time with Viking is done, the dragon will be donated to a local school.

Whither the HBO Game of Thrones franchise, post-pandemic? (video) 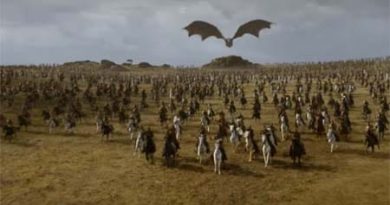