There are several contemporary horror showcases that could certainly benefit from co-writer/director Fede Alvarez’s (‘Evil Dead’) edgy home invasion thriller ‘Don’t Breathe’. For starters, Alvarez taps into the suggestive elements of tension without the over-extended need to go overboard. The chills and thrills seem almost organic and unassuming. Sure, there appears to be a simplistic approach to an otherwise conventional premise of a house break-in at the hands of opportunistic thugs. Nevertheless, ‘Don’t Breathe’ captures the claustrophobic spirit of its inherent creepiness with stylish cruelty and cleverness. Inevitably, ‘Don’t Breathe’ may inspire cinematic comparisons to the 2002 David Fincher-directed vehicle ‘Panic Room’. Understandably the theme is somewhat recognisable to movie audiences as ominous strangers invading your domestic private space is a recipe for paranoia and persecution. However, ‘Don’t Breathe’ takes this precarious situation to a whole new scare tactic level of horrific proportions. Consequently, the executed violence and terror-driven tempo is definitely worthy of its suspense-driven objectives. ‘Don’t Breathe’ is a macabre masterpiece in the making that sets the standard for a current-day stillborn and repetitive horror genre that thrives on pressure cooker predictability.

The set-up for ‘Don’t Breathe’ is quite ambitious and challenging thus forming an interesting spin on the home robbery scenario. The sordid story centres around three upstart small-time crooks making the rounds of thievery in the suburban surroundings of Detroit. Rocky (Jane Levy) and her two male companions Money and Alex (Daniel Zovatto and Dylan Minnette) are able to carry off their home invasion scamming courtesy of Alex’s connections to a home security firm owned by his father, where there is all kinds of access information to private residences and local businesses.

Alex’s stipulation, however, is that these home invasion robberies need to be less flashy without drawing too much attention. Plus, all the stolen items confiscated much not be too expensive otherwise their illegal activities will be exposed much sooner than later. Unfortunately, lovebirds Rocky and Money do not see eye-to-eye with Alex’s brand of careful and cautious home-robbing philosophy. In fact, the romantic couple wants to reach for the sky and steal as much stuff possible to make their dreams of living on East Street an immediate reality. So what will it take for Alex to get on the same page as Rocky and Money in terms of all of them benefiting on a big score without suffering the dire consequences?

The consensus is reached among the law-breaking trio that their next target for viable riches is in the form of a blinded Iraqi war veteran (Stephen Lang). The word is that the personally troubled and sightless ex-military man is about to be awarded a whopping three hundred thousand dollar cash settlement involving the wrongful death of his beloved young daughter. So the home invasion task seems quite self-explanatory to the young heist-happy hooligans as committing theft against a seemingly vulnerable blind man emotionally and psychologically down in the dumps should be a piece of cake so to speak. Well, Rocky and her two boytoys were sadly mistaken if they thought that they could take sole advantage of this savvy yet disturbed disabled war vet with visions of sorrow and sacrifice.

The realisation that the home-invading crew has picked a tricky trap of a house to pillage while underestimating the capabilities of its handicapped owner seems like poetic justice. In fact, the irony of the criminal threesome trying to escape the boarded-up dark and dingy household makes them look like the victimised three blind mice at the mercy of a crazed trigger-happy, sight-deprived ex-soldier that can see all too well that his cherished castle and belongings are being jeopardised by these punkish intrusive violators. Strangely, the audience is left wondering whether or not they should root for the blinded bombshell protecting his homestead of secrets or the clueless crooks that talked themselves into this caustic cat-and-mouse game of gloom-and-doom.

‘Don’t Breathe’ is uncharacteristically compelling for a horror showcase because it relies on genuine scary jolts and jumps…or at least the anticipation of the jolts and jumps that have convincing dramatic weight behind the build up of intensity. Alvarez crafts an arousing narrative that brilliantly displays the mounting nervousness that awaits. Lang’s belligerent blind man patrols every spacing and crevice in the darkness with the will of a rabid dog in heat as he points his explosive firearms at the slightest movements of his trapped guinea pigs in despair. Creatively nerve-racking and nauseous, ‘Don’t Breathe’ makes dutiful usage of its instinctual delivery of shock value as this potent pot-boiler never settles for any sense of false or mechanically manufactured hedonism. The haunting aura that exists in ‘Don’t Breathe’ is gasping in visceral authenticity.

As the menacing misfit saddled by wartime mortar fire blindness but blessed with tactical tenacity drenched in borderline villainy, Lang’s portrayal as the sightless hunter tracking down his vulnerable prey in his tortured domestic playground is solidly digestible. His inner madness was already established by personalised heartbreak but the arrival of his uninvited guests devilishly unleashed more demons within his off-kilter psyche. The moving targets at the other end of the deranged blind man’s intimidating gun are thoroughly convincing as the harried catalysts for their sightless tormentor’s frustration and escalating rage. Levy’s Rocky, Zovatto’s Money and Minnette’s Alex are plausible as the frightened specimens caught in the maniacal maze of their aggressor’s clutches.

The very thought of a psychotic blind man enforcing his brand of warped justice on the youthfully sighted self-indulgent saps is deliciously manipulative and wonderfully inventive. The creepy corners concerning the backlash blackness in ‘Don’t Breathe’ is explored with grand naughtiness and the atmospheric vibes certainly will not disappoint in this percolating peek-a-boo primer.

Directed and Co-Written by: Fede Alvarez 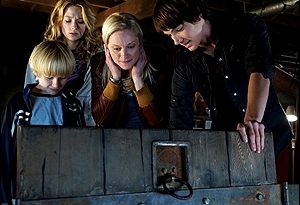 House at the End of the Street (Frank’s Take).