‘Time Heist’ is the fifth episode of ‘Doctor Who’s eighth series (season 34 for purists) and saw the Doctor and Clara robbing the most secure bank in the universe. If you haven’t seen it yet you may want to start with Geoff’s spoiler-free post here: LINK. Otherwise, the Teller will see you now… ‘Doctor Who’ finally pastiches the heist movie, though to be fair ‘The Ribos Operation’ also counts in a more genteel way. The Doctor and Clara find themselves being tasked with robbing the bank of Karabraxos alongside Psi, an augmented human who has whole computer chips clipped to his skull (which is retro-looking tech considering the size of a Micro SD card) and Saibra, basically Mystique from the X-Men without the nudity, able to mimic the look of any person she touches. The bank itself is a highly secure facility with underground vaults, special forces security and a creature that can detect guilt called The Teller, stalking the corridors of the bank like the Minotaur. ‘Mission: Impossible’ by all accounts.

The joy of heist movies is derived from both the tension of pulling off the caper and also the clever tricks that the team employ to make it happen. As the Doctor points out, robbing a bank is easy if you have a TARDIS, so watching the Doctor slowly piece together the plan and his own memories is a very enjoyable part of the episode. This week we again see the Doctor at the forefront of proceedings (not to detract from another excellent performance by Jenna Coleman) and Peter Capaldi articulates both the Doctor’s excitement at the prospect of carrying out a bank robbery, but also his anger at being manipulated by ‘the Architect’ the caper’s shadowy sponsor.

As fits a thematic established in ‘Deep Breath,’ the Architect turns out to be the Doctor himself. This is augmented by Saibra’s ability to mimic faces, ‘Could you trust someone who looked like you out of your own eyes?’ she asks him. While the line clearly references Madame Karabraxos’ use of clones as her own staff, it also calls to mind the Doctor examining his own face after his regeneration. Intriguingly, there’s an odd, quick exchange between the Doctor and Saibra in the TARDIS just before she leaves: ‘See, I don’t have your face now,’ she says, indicating that she’s taken the Mutation Inhibitor. ‘Yeah, I kind of miss that,’ replies the Doctor. Though I couldn’t recall her ever taking on the Doctor’s face in the episode? Saibra is ably played by Pippa Bennett-Warner, who usually divides her time between acclaimed Shakespeare performances on stage and television detective drama. Steve Thompson and Steven Moffat sensibly made neither her character or Psi’s a sassy, smug thief (remember Lady Christina de Souza?), instead both conveyed wariness and mistrust, quite sensibly given the circumstances. Jonathan Bailey, Leonardo in ‘Da Vinci’s Demons’ played Psi, and both made their scenes of self-sacrifice and resurrection believable. You, too, may have chosen suicide over facing the Teller, easily one of the best new ‘Doctor Who’ monsters since the Silence. Lumbering like a ‘Star Wars’ cantina patron, but dressed in Guantanamo-issue orange overalls, the tentacle movement of its eye-stalks were frightening enough. However, once you knew the monster was being kept imprisoned, it was clear that the Doctor would do something about it.

The Teller’s gaoler Miss Delphox aka Madame Karabraxos seem to fall off the assembly line of clichéd female ‘Doctor Who’ villains. There’s a visual shorthand associated with this and it’s permeated throughout the show, especially since the 2005 revival. In the 2008 story ‘Partners In Crime’, Sarah Lancashire played Miss Foster aka Matron Cofelia, who was acting as a foster mother to the Adipose. Her look was modelled on that of Jo Frost the ‘Supernanny’ in promotional pictures that were taken of Frost to promote the series. Frost was dressed head to foot in black – blouse, pencil skirt, tights, heels and glasses with red lipstick. In short, she was channelling the highly fetishised look of the dominatrix as a joke on her position as a nanny or more traditional governess. In ‘Doctor Who’, though, the look stuck and not just for villainesses. Consider River Song’s introduction in ‘The Time Of Angels’ and the heels and the lipstick reappear. Since then, we’ve had Madame Kovarian, Miss Kizlet and, now, Missy. Steven Moffat clearly has a penchant for this sort of look plus remember that Amy was firmly in charge and even the Doctor called Clara ‘Boss’ at the end of this episode, while the production team use the ‘Miss Foster’ look as a visual cue to say ‘this woman is in charge and she’s probably a baddie’. There is an undercurrent of femdom in ‘Doctor Who’.

The look of the rest of the episode was again handled well by Douglas Mackinnon who understood just what tropes were needed to convey the heist feel. While the slow-motion walk still reminds me of ‘Hustle’, it was clearly meant to echo ‘Ocean’s 11’, as well as the rapid-cut montage of the team pulling together their tools to take the job on. The episode also contained some nice Easter eggs, too. Yes, the past story references went off the chart with Psi’s ‘Guiltiest Of The Galaxy’ gambit, the highlight of which was a picture of Absalom Daak: Dalek Killer as drawn by Lee Sullivan for the ‘Doctor Who Magazine’ strip, ‘Nemesis Of The Daleks’. The more musically inclined might have spotted that Madame Karabraxos was listening to the ‘Overture To The Abduction From The Seraglio’ by Mozart, an opera singspiel which tells the story of Belmonte attempting to rescue his love Konstanze from the Pasha Selim’s clutches. Essentially, then, as this story is a rescue mission for a love held captive.

While ‘Time Heist’ experimented with a typical Moffat move of trying not to do something you do all the time, eg blink, breathe, this time ‘think’, this episode didn’t feel like it was going over old ground. It told a highly entertaining, self-contained story well and in half the time of a feature film. Never kid yourself about how remarkable that is. There are a few points that don’t stand up to too much scrutiny, for example what kind of risk assessment would OK a bank being placed on a planet next to an unstable sun? However, that’s a small point. Once again it feels like the whole team is putting the effort in to making quality television, packed full of ideas, thought-provoking but, above al,l fun and just a tiny bit scary. 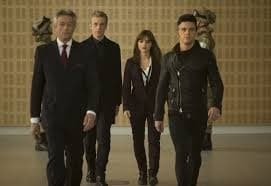 Doctor Who: Time Heist by Steve Thompson and Steven Moffat (Doctor Who review).

Doctor Who: Time Heist by Steve Thompson and Steven Moffat (Doctor Who review).