‘The Triple Knife And Other Doctor Who Stories’ is a collection of stories by Jenny T. Colgan already published elsewhere. If you already have these stories you may not want to purchase them again but this book will make a nice gift for a younger reader who may be inspired to write themselves. 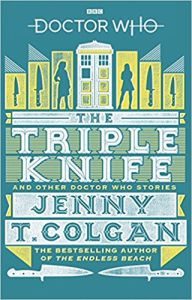 The title story that picks up a comment in the TV series and shows us the true heartbreak of eternal life and just why the woman eventually known as Me grows to hate the Doctor.

It is the time of the plague and Ashildr has fled to London with her children but there is no escape and death follows her. It’s a story of love, death and aliens. This is the human condition and how we try to rise above it.

When the Doctor and Clara find a completely uncharted hidden planet they seem to forget that generally there is a good reason for it to be hidden.

This is beautifully visualised. You can almost smell the planet. The details within this short story stand out and the dialogue between the pair is sharp. Colgan brings an emotional depth to events often overlooked.

When River Song breaks out of gaol for a picnic, she has an ulterior motive but it’s hard to have a sensible conversation with the Doctor when all Asgard’s breaking loose.

Another caper with River and the Doctor. Her interior dialogue is as important as anything else that happens but the neatly made story dovetails into her concerns. It creates a satisfying ending with River having the last word, of course.

All The Empty Towers

A fun day out at Blackpool goes seriously wrong but, despite being in the future, it seems human nature endures. There’s some lovely dialogue here as Clara tries to explain a day at the seaside to the Doctor.

A Long Way Down

The TARDIS doesn’t want to talk to Clara or save the Doctor. Perhaps she knows more than Clara does. Whatever, Clara needs a plan before he goes splat into a planet.

The one-sided conversation between Clara and the TARDIS and what goes unsaid between her and the Doctor is another reminder of all that has gone on through the series and how it all ends.

This is a great collection of stories. My one complaint is that the headliner story doesn’t feature the Doctor. That said, they are very readable, bringing the characters into sharp focus and filling in the gaps between the series. Yes, there are dark themes but there is also light and a donkey. What’s not to like? 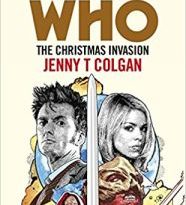 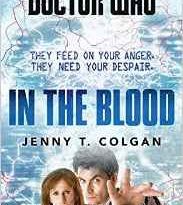