Skip to content
You are here:Home » Doctor Who: Series 12 (or 37 depending on how you count): Episode 9: Ascension Of The Cybermen by Chris Chibnall.
Doctor Who
February 23, 2020February 24, 2020 UncleGeoff cybermen, Doctor Who 3 min read
550.6k
SHARES
ShareTweet

Be warned, with three story strands spread throughout the story much if not all is SPOILER and I’m looking at them as sub-plots than jumping from one to the other. As the first of a two-parter, there’s no resolution and I’m minimising guesswork. I’m calling the last humans ‘humans’ as much of the time that’s all they are reduced to. Their names don’t really stick and no explanation where Ravio got so much mascara.

In the Ireland, in what appears to be the past, a couple crofters raise an orphan baby they call Brendan who becomes a guard/police officer. He gets shot stopping a robber but not injured. Shown retiring but everyone else isn’t aging and wired to get some shock treatment to forget. I can speculate where this is going. 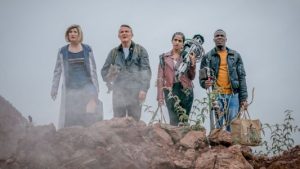 After the Cyber-Wars, the Doctor and friends arrive at the last human settlement on Earth where only 7 humans are left to protect them from a Cybermen attack. Cyber-drones attack and the defences don’t work, forcing the Doctor to order an evacuation.

The Doctor orders her friends to go with the settlers on their own spaceship rather than risk being cybernised. You do have to wonder what makes the Doctor think she’s immune?

Ravio (actress Julie Graham) with Yasmin and Graham and two other humans run out of fuel on their spaceship but can’t get to Ko Shamur and arrive at the remains of a Cybermen battle and land on one of its troop carriers. Hardly surprising Ravio and Graham find several hundred Cybermen in stasis. The damaged cyberman from the previous story is leading a landing there after following them and they are essentially trapped.

Not everyone gets away Ryan and two humans are left and although the Doctor rescues them, they can’t get to the TARDIS, so where did she leave it? They steal a Cyber-shuttle and go to meet Ko Shamur. He got the others off through the Boundary and remained behind in case anyone else arrived. So why did the 7 stay on Earth when their spaceship was at least workable to have gotten them there with a bit more work? The Boundary links to Gallifrey and the Master.

That’s it really. The ultimate in a losing battle with very few answers and left me with what can I say until I see the second part. However, there is some confusion for those of us who are aware of ‘Doctor Who’ mythos. I mean, the Tennant Doctor and Rose also visited the Earth in its last days before the sun exploded so we know humans survive. Also, in the far future, humans have colonised the universe so it’s not like the last 7 are the only humans left. Could the Cybermen have killed the rest of without the Daleks getting in the way?

Plotwise, there is a lot of contrivances. I mean, why leave the TARDIS out of the way to bring the equipment in. The simplest solution would have been to bring the TARDIS directly to the settlement and take them all off and not bother with the force field. It isn’t as though the TARDIS is short of space inside. With the co-ordinates, the Doctor could have taken them to their final destination. Granted it would have shortened the story but that’s what writing is all about. Chris Chibnall could have come up with a better start to this story.

No doubt we’ll find out at a later date what Chibnall was playing at. Going for spectacle is one thing but from a plot-hole point of view, someone really should have asked whether he could have done better. 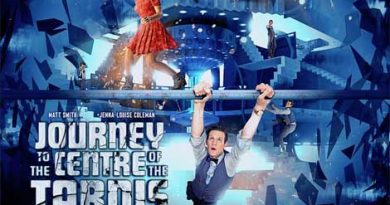